People gather at the scene of crashed train for collecting oil 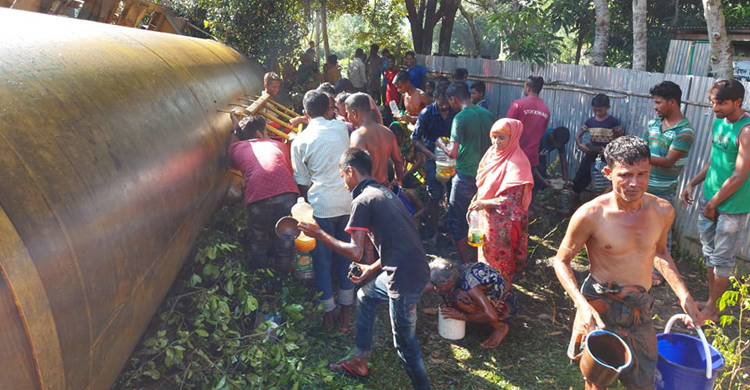 Tasmiah Nuhiya Ahmed of DOT
[2] As a result, rail communication with Sylhet is closed all over the country. The train derailed in Satgaon area of ​​Srimangal yesterday (November 8) at around 12 noon on its way to Sylhet.[3] Meanwhile, due to derailment of oil-carrying bogies, oil has spread on and around the railway line. [4] A man named Tanvir Anjum, who was at the scene, said hundreds of people were collecting oil.Hamida Begum is collecting oil with a bucket. “I don’t know what oil it is, but I got it for free, so I collected half a bucket,” he said.[5] Abdul Alim, a local resident, said, “I collected like three liters, it’s diesel. If it doesn’t work, I will sell it.[6] Locals say there was diesel in the train carriages.[7] Shakhawat Hossain, assistant station master at Srimangal railway station, said ordinary people were collecting oil after seven bogies derailed. The bogies contained 160,000 liters of octane, diesel and kerosene.