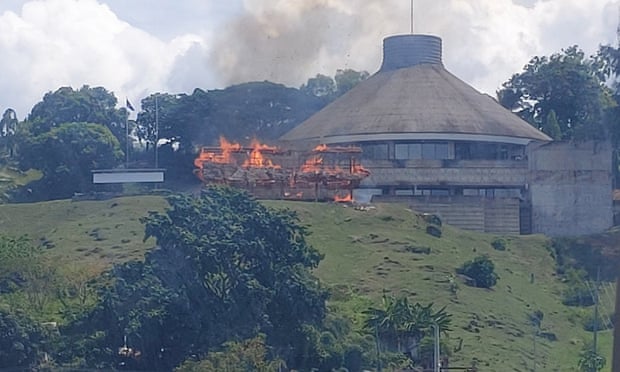 Police in Solomon Islands have used tear gas and rubber bullets to disperse hundreds of protesters, who allegedly burned down a building in the parliament precinct, a police station and a store in the nation’s capital of Honiara, amid reports of looting.
The protesters marched on the parliamentary precinct in the east of Honiara, where they allegedly set fire to a leaf hut next to Parliament House where MPs and staffers go to smoke and eat lunch.
“It was quite traumatising for us,” a staff member working at the national parliament said. He said luckily for them the police were able to control the situation, enabling them to leave.
A police station and another building, owned by a Chinese national, were also burned down during the protests. “We did not expect the crowd to come here,” said a female police officer on duty at the station.
“We were all in our offices when we heard the crowd. We came out to look but they began raining our building with stones. So I shouted to my colleague for us to hide in a room in the station. We were in the room when we started to choke by the smoke of fire. It was then that we realised that they torched the building.” The protesters were demanding the prime minister, Manasseh Sogavare step down. Many of the protesters come from Malaita province, the most populous province in the country whose provincial government has had tense relations with the central government for years.
The tensions between the provincial and national government intensified in 2019 when Sogavare announced that Solomon Islands would switch its diplomatic allegiance from Taiwan to China, to the chagrin of Malaita premier Daniel Suidani.
Speaking to the Guardian from Auki, the capital of Malaita, Suidani said the protests – which he was not present at – happened as a result of the government not listening to the people or engaging with their concerns on a range of issues, including infrastructure projects and the China-Taiwan switch. “In my view, whatever the government wants the people to know, they must stand and tell them. They cannot run away from problems.

It will not solve anything”, Suidani says.
Alpheous Nori, an elder from East Are’are in Malaita who attended the protests but was not involved in the violence, says the situation got out of hand because the national leaders did not listen to the people.

“It is time for the country to rebuild, reconstruct, revamp or redirect as the people have now spoken,” Nori said.