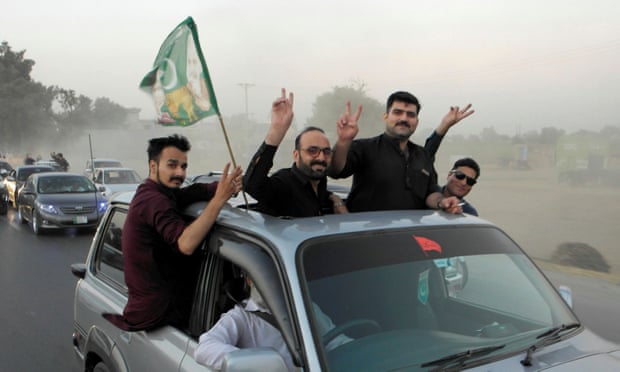 The Guardian: [2] An anti-government demonstration in Pakistan organised by a new alliance of opposition political parties drew crowds of tens of thousands on Friday in scenes described by the prime minister’s opponents as the “beginning of the end” for Imran Khan.
[3] The protest in Gujranwala on Friday was the first held by the Pakistan Democratic Movement (PDM), an alliance of 11 opposition political parties that have united to oust Khan from power. [4] Maulana Fazlur Rehman, leader of the PDM, said: “This is an illegal government. It’s been imposed upon us by the establishment. We reject this illegal rule.”
[5] Three-time former prime minister, Nawaz Sharif, in his first public speech since his release on bail to go to the UK for medical treatment, accused the army of toppling his government and installing Khan during elections in 2018.
Speaking via videolink from London, the former leader, who was sentenced to jail on corruption charges, said: “Should I blame Imran Khan for this catastrophe, unemployment and inflation or people who brought him into power? Who stole your vote and rigged your election? Who selected this government?”

Calling for “one Pakistan for all”, he urged punishment for the military figures he says installed Khan and violated the constitution. “ I am being labelled as traitor right now because I talk of constitution and democracy,” he said.

The night before the rally the government embarked on mass detentions and arrests of about 500 opposition figures and activists, mainly from the opposition Pakistan Muslim League-Nawaz (PML-N) party.

Civil rights activist arrested in Pakistan on sedition charges
Read more
“Over three decades of political experience, I have seen martial law imposed but I have never witnessed this kind of brutality,” said Iqbal. “The raids against our workers are still ongoing. They have put containers in our way, arrested workers and torn banners, but we won’t stop. It’s the beginning of the end for Khan.”

The PDM alliance, which was formed last month, is the first time in Pakistan’s history that all opposition political parties have come together to challenge the military’s interference in politics. The three mainstream opposition parties – PML-N, Pakistan People’s party (PPP) and Jamiat Ulema-i-Islam-Fazl (JUI-F) – are at the forefront of the movement.

The party leaders allege that the military, which wields enormous unchecked power in Pakistan, rigged the 2018 elections that brought Khan’s Pakistan Tehreek-e-Insaf party to power, and that his administration is just a puppet for the military’s agenda.

Iqbal said: “We don’t need the involvement of military establishment in politics. It must stop. That’s why all opposition will gather today. There is only one way forward for Pakistan – democracy without military involvement.”

The rally is the first of many protests and public meetings that the PDM has planned over the coming weeks, before they embark on a “long march” to parliament in the capital, Islamabad, in January 2021 to demand that Khan steps down. The opposition leaders have said they would use mass resignations and votes of no confidence in parliament to take down the government.

The protests come at a time when Khan’s government is struggling to cope with a severe economic decline, unemployment and the worst inflation rates in Asia, causing a steep rise in food prices which have led to mass discontent.

Pakistan’s dire economic situation was worsened by the coronavirus pandemic, with the country’s economy contracting for the first time in 68 years in June.

Pakistan is seen as having handled the pandemic relatively well so far, reporting just 322,000 cases and 6,621 deaths in a population of 220 million, far below neighbouring India. However, there are fears that complacency is paving the way for a second wave.

At Friday’s rally, for which 50,000 people piled into the stadium, no social distancing was enforced and no face coverings were visible on people in the crowd or on political leaders.