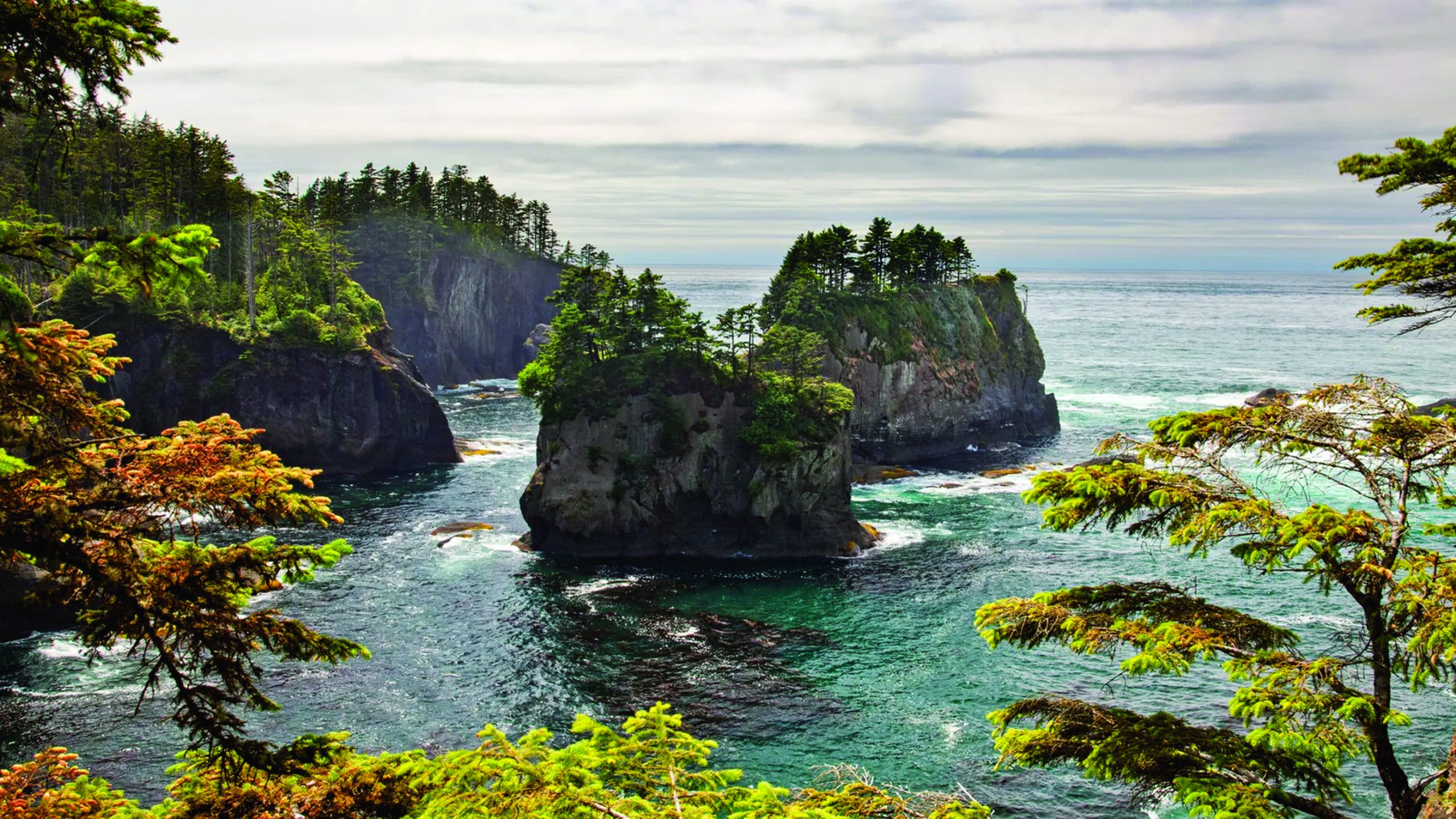 In 1970, a violent storm uncovered a Makah village that was buried by a mudslide more than 300 years earlier. A newly re-opened museum tells the fascinating story of the ancient site. Coming to the end of a short, winding trail, I found myself standing in the extreme north-west corner of the contiguous US, a wild, forested realm where white-capped waves slam against the isolated Washington coast with a savage ferocity. Buttressed by vertiginous cliffs battling with the corrosive power of the Pacific, Cape Flattery has an elemental, edge-of-continent feel. No town adorns this stormy promontory. The nearest settlement, Neah Bay, sits eight miles away by road, a diminutive coast-hugging community that is home to the Makah, an indigenous tribe who have fished and thrived in this region for centuries.

The Makah are represented by the motif of a thunderbird perched atop a whale, and their story is closely linked to the sea. “The Makah is the only tribe with explicit treaty rights to whale hunting in the US,” explained Rebekah Monette, a tribal member and historic preservation programme manager. “Our expertise in whaling distinguished us from other tribes. It was very important culturally. In the stratification of Makah society, whaling was at the top of the hierarchy. Hunting had the capacity to supply food for a vast number of people and raw material for tools.”
After reading recent news stories about the Makah’s whaling rights and the impact of climate change on their traditional waters, I had come to their 27,000-acre reservation on Washington’s Olympic Peninsula to learn more, by visiting a unique tribal museum that has just reopened after a two-year hiatus due to Covid-19.

Due to a trick of fate, Makah history is exceptionally well-documented. In contrast to other North American civilisations, a snapshot of their past was captured and preserved by a single cataclysmic episode. In 1970, a brutal Pacific storm uncovered part of an abandoned coastal Makah village called Ozette located 15 miles south of Cape Flattery. Part of the village had been buried by a mudslide that was possibly triggered by a dramatic seismic event around 1700, almost a century before the first European contact. Indeed, recent research argues that ancestors of the Makah – or related Wakashan speaking people – have been present in the area for at least 4,000 years, which, if proven, would change our understanding of prehistory in the Olympic Peninsula and Vancouver Island. Miraculously, the mud had protected embedded organic matter by sealing it off from the air. As a result, thousands of well-preserved artefacts that would normally have rotted – from intact woven cedar baskets to dog-hair blankets and wooden storage boxes – were able to be painstakingly unearthed during a pioneering archaeological dig.

Due to the suddenness of the event and the exceptional levels of preservation, scientists hailed the find a “Western Pompeii” and the Washington Post called it “the most comprehensive collection of artefacts of a pre-European-contact Indian culture ever discovered in the United States”. Anxious the material might be engulfed by the sea and lost, the tribe called in Richard Daugherty, an influential archaeologist at Washington State University who’d been involved in fieldwork in the area since the 1940s. Having good connections with Congress, Daugherty helped secure federal funding for an exhaustive excavation. “Dr Daugherty was instrumental in the excavation work,” recounted Monette.

“He was very progressive and interested in working alongside the tribe in the process. He worked to gain financing for 11 years.” The Ozette dig lasted from 1970 until 1981 and ultimately unearthed around 55,000 artefacts from six beachside cedar houses covered by the slide. The Makah, like many indigenous groups, have a strong oral tradition, with much of their history passed down through storytelling, song and dance. The evidence unearthed at Ozette affirmed these stories and added important details.
“It was a spectacular place to excavate; the preservation and richness was extraordinary,” recalled archaeologist Gary Wessen, a former field director at the site who later wrote a PhD dissertation on the topic. “Ozette is what we call a primary deposition. We have all these materials preserved in the places where they were actually used. It helps tell us more about the social and spatial relationship of the people who lived in the houses.”
While much of the material dated from around 1700, some of it was significantly older. Indeed, archaeologists ultimately determined that multiple mudslides had hit Ozette over a number of centuries. Beneath one of the houses, another layer of well-preserved material dated back 800 years. The oldest finds so far have been radiocarbon-dated to 2,000 years and there are middens in the area that are at least 4,000 years old, according to Wessen. From the outset, the Ozette dig was different to other excavations. Tribal members worked alongside university students at the site, and, early on, it was decided that the unearthed material would stay on the reservation rather than be spirited off to distant universities or other non-indigenous institutions. In 1979, the tribe opened the Makah Cultural and Research Center in Neah Bay with a museum to house a “greatest hits” of the collection. The 500 pieces currently on display represent less than 1% of the overall find.
“The tribe was very assertive of their ownership and control of the collection,” said Monette. “A lab was developed in Neah Bay. For the museum, we hired Jean Andre, the same exhibit designer as the Royal BC Museum in Victoria. We decided to tell our story seasonally with sections on spring, summer, fall and winter.”
The result, which has only recently reopened, is a beautifully curated space. Outside on a verdant lawn, I was welcomed by a reconstruction of a traditional wooden Makah house and two large statues wearing distinctive cedar-bark rain hats. Inside, where I met Monette, the assembled exhibits left no doubt about the tribe’s maritime prowess. I saw 13ft whaling harpoons, wooden paddles and seal skin buoys. A large central space was taken up with two red cedar canoes guarded by a giant whale skeleton. We proceeded through a mock-up of a dark wooden Makah house with an opening that looked out over a hyper-realistic diorama of the seashore at Ozette.

I was particularly enamoured by the artistry of many of the carved wooden objects. There was a dorsal fin of a whale studded with hundreds of sea otter teeth, and an unusual figurine of a woman lying prostrate in the act of childbirth. These artefacts, along with ornate seal clubs and delicate combs, testify to a remarkable level of craftsmanship.

“The Makah were skilled woodworkers,” said Wessen. “They exhibited levels of sophistication regarding technology that weren’t appreciated before.”

There are several elements about the Ozette project that make it one of the most important archaeological finds in North America to date. The sheer size of the collection coupled with the scale of the effort to recoup it was unprecedented. Then, there’s the calibre of the preservation, which, at times, was almost surreal. Wessen recalled excavators using fire hoses to blast the clay off vegetation entrenched in the mudslide. In the process, they exposed green leafy alder branches to sunlight for the first time in more than 300 years. As the oxygen hit, the leaves would quickly turn black, but for 15 to 20 seconds, workers were treated to a glimpse of a bright green leaf from 1700.

Neah Bay today has a population of just more than 1,000 people and an economy based mainly on fishing. After returning to the town from my blustery walk out to Cape Flattery, I sought shelter in a small waterfront joint called Calvin’s Crab House and watched as the weather swung capriciously between sun and rain.

Just outside, a small monument marked the site of Fort Núñez Gaona, a colonial outpost established by a Spanish lieutenant called Salvador Fidalgo in 1792 as the first non-native settlement in the north-western US. Although the Spanish only stayed for four months, their presence marked an important historical watershed, the moment in which two cultures intersected and learned to live alongside each other in a new and different world. Uniquely, Ozette offers us a time capsule of Native life before the changes prompted by European contact.

With the weather closing in, I decided against visiting the archaeological site, which is isolated and difficult to reach without a car. Unlike Pompeii, there are no ruins to walk around – although the surrounding beaches are spectacular – as the site was backfilled in 1981. All that remains today is an abandoned ranger station, a small memorial shed and some indigenous petroglyphs carved on rocks.

As to whether there’s anything else down there, Wessen speculated there might be, but admitted that there’s still more research to be done on the existing artefacts first: “The Ozette collection in its entirety has not come anywhere close to having its full research potential realised,” he said.