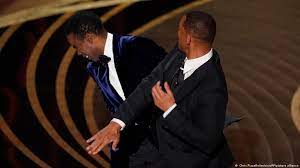 By now most everybody has seemingly seen video, pictures or at least heard of the slap heard around the world.
During this past weekend’s Academy Awards ceremony, actor Will Smith took issue with a joke by comedian Chris Rock who made a quip about Smith’s wife Jada Pinkett Smith’s shaved head.
Pinkett Smith has been battling with alopecia areata, a disease that occurs when the body’s immune system attacks hair follicles.
What was a fairly mundane ceremony, turned controversial by Smith, who strode to the stage after Rock’s joke about his wife’s baldness and struck him. The fallout quickly overshadowed anything else in the night and social media sites like Twitter and Facebook exploded with people predictably taking sides on who was to blame.
To be clear, we’re not taking a side in a moment that should have been handled in an adult fashion rather than tasteless joke and an outburst of anger and violence.
Was the joke tasteless? On the surface, yes.
Should Smith have reacted the way he did? Absolutely not.
Instead, this should be a moment where adults set children down and talk to them as to why this scenario should be avoided and how to make amends. The conversation should involve how you resolve things like this by talking, understanding and if warranted — apologizing.This event was on national television with millions of people watching, and this included children. You simply can not go up to somebody and hit them because they said something you didn’t like.
That’s not how the world operates.
On the flip side, it’s important for people and children to know the power of words. Feelings and actions can be transmitted by simply joining just a few words together. Another valuable lesson for kids.
Regardless of whether or not you feel this was “just a joke” or not, the point is that in the end it ended with Rock being slapped followed by a weak apology later that night by Smith.
A deeper apology did come a day after the event, when in all honesty it should have come later that night, face-to-face.
While the whole affair is unfortunate, there is a way to use it to effect discussion and change. Be responsible for your words and actions and own up to mistakes.
This is how we build a world free of celebrities slapping each other at nationally televised award ceremonies.