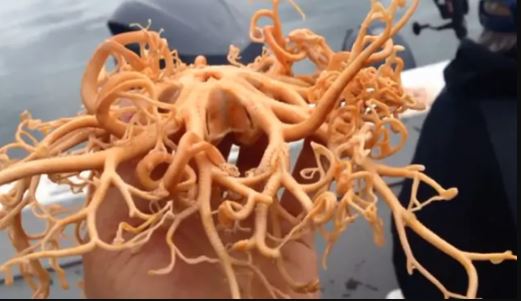 BBC: A video of a mysterious sea creature caught off the coast of Alaska has gone viral on the Internet. Angler Sarah Vasser-Alford reeled in the creature that many have described as “strange” and “alien” about three weeks ago. She shared a video of the orange sea creature wriggling its tendrils on Facebook, where it has collected over 1.1 million views. According to the Mirror, Ms Vasser-Alford reeled in the creature from off the coast of Prince of Wales Island, Alaska, in August. The footage she shared online shows the creature moving its curly tentacles. Blood vessels can be seen when she turns it over. The footage left viewers curious.
Take a look at it below: