Obama on Islamic State group: ‘We will defeat them’ 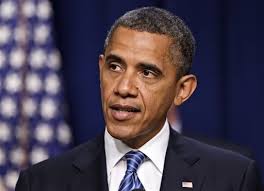 President Barack Obama is underscoring that destroying the Islamic State group is his top priority.
He says it remains a difficult fight, but is expressing confidence in victory. He says the group continues to lose ground in its strongholds in Iraq and Syria, and is being squeezed financially. Says Obama: “We are going to squeeze them and we will defeat them.”
Obama commented at a White House meeting Tuesday with the Joint Chiefs of Staff and the combatant commanders. He says they’ll be reviewing defense strategies and the spending to carry them out. Obama says the meeting is also a chance to thank U.S. service members for their sacrifices.
Obama, his wife, Michelle, and Vice President Joe Biden were also hosting a White House dinner for the military leaders.