‘Now I can buy my mother a gold necklace’: Krishna Rani thankful after BFF compensates for missing money 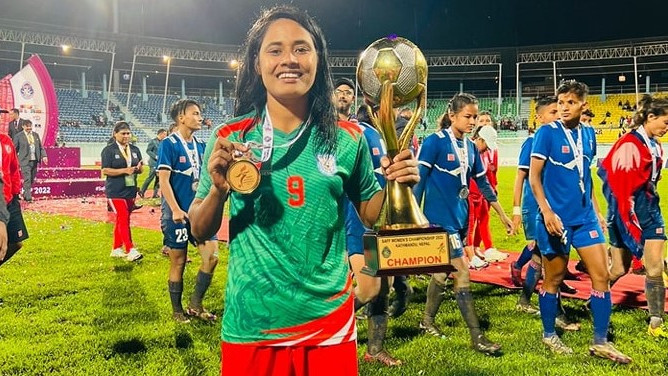 DOT Desk:Krishna Rani Sarkar intended to buy her mother a gold necklace with her own money but much to her misfortune, she lost 500 dollars and BDT 50 thousand at the airport. But the Bangladesh women’s team forward doesn’t have to remain sad anymore as the Bangladesh Football Federation (BFF) has compensated for the missing money of the SAFF champion footballers, Reports TBS.
Shamsunnahar Sr and Sanjida Akhter lost 500 and 400 dollars each as well. Notably, Sanjida saved the money to buy an iPhone. Shamsunnahar and Krishna have received double the amount of money they lost and the federation gifted Sanjida an iPhone.
“I thank the BFF president Kazi Salahuddin Sir and women’s wing head [Mahfuza Akhter] Kiran apa. Salahuddin Sir said that he would give us the money and he has done that. I’ll go today itself, to buy the gold necklace for my mother that I liked,” said Krishna.
“I wanted to add some money to the prize money and buy an iPhone. I’ve got that now thanks to Salahuddin Sir. We have got three times what we have lost,” Sanjida stated. Shamsunnahar believed that they would get the money real soon. “We are very happy. Salauddin Sir assured us in the meeting that we would get the money. That’s when I realised that we would get it soon,” she mentioned.