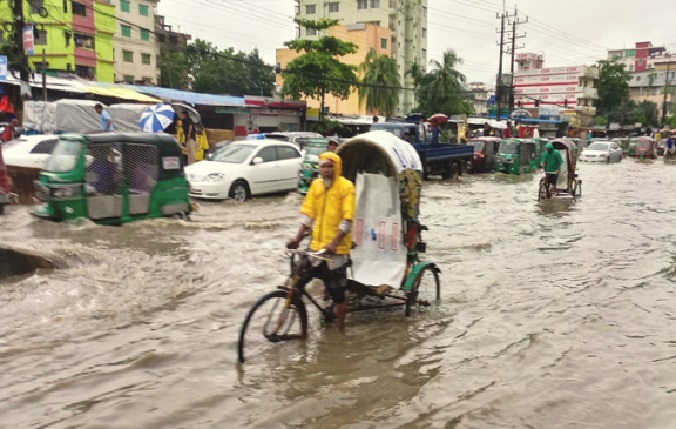 DOT Desk: Heavy rains continue to lash the port city of Chittagong, leaving roads waterlogged and adding to the suffering of the locals, reports Dhaka Tribune.
The 24th meeting of the Chittagong Hill Management Committee chaired by Chittagong Divisional Commissioner Md Ashraf Uddin was held on Tuesday, June 21, 2022 Dhaka Tribune
Despite the continuous rain, there is no fear of a massive flood like that of Sylhet hitting Chittagong, according to government officials.

“Chittagong does not have as many hill slopes as other cities. We are not expecting a massive flood like the one that hit Sylhet right now. In addition, the Chittagong-based river water flow is average,” said Shojib Chakroborty, the district relief and rehabilitation officer (DRRO) of the deputy commissioner’s office.
Despite his claims, the continuous heavy rain has left the roads, houses and shops flooded.
The rain that began on Thursday, had the city completely submerged by Saturday and the number of flooded areas is still increasing. The incessant rain has left many people in Chittagong city and its surrounding upazilas stranded in shelters or stuck in their own homes.

According to the Meteorological and Geo-Physical Center Deputy Director Syed Abul Hasanat, Chittagong received a record amount of rainfall in the 24-hour period till 3pm on Monday.

“We are hoping that the heavy downpour will stop in a few days. The western pressure has passed across our region with Monday’s rain. It will shift north of the Himalayas,” he said.

He added that heavy rainfall is likely to give way to light rain in the upcoming days.