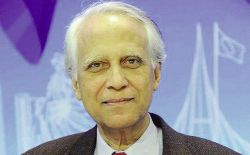 Ambassador Muhammad Zamir
Over the past decade energy security has emerged as one of the most critical issues within the South Asia region. Careful monitoring has indicated that disruption of power and other forms of energy supply are at times resulting in serious crises affecting both human requirements (food, livelihood, employment and economy) and national security (environment, international trade communications, transport and all other services).

The incapacity of being able to provide the increasing industrial and other commercial needs are adversely affecting not only productive activities and social development but also investment climate. This scenario is being further aggravated by financial, structural and institutional problems.
It has also been noted that the per capita commercial energy consumption in the region has increased but continues to be quite low. This connotes the potentials for more energy consumption. At the same time, the persistent shortage of energy has been a major factor in keeping the region within comparatively low growth symmetry.

The traditional sources of energy in the rural areas of the region is mostly constituted through- firewood, animal dung, crop residues etc. They are still the major energy sources to the larger rural population in most of the South Asian countries.

This scenario is adversely affecting the sustainability of the natural resources including that of forests. It is also creating a critical dimension pertaining to the unstable distribution of the available energy both within a country and across the region and generating a mostly adverse impact of poor power quality on economic activities. Availability of energy- renewable or otherwise- can change the quality of life and work substantially. It facilitates better health standards and assists in education- both digital as well as in the evening. This also helps in the generation of rural employment opportunities through the traditional handicrafts industry and in motivating people. In case of the rural areas, this helps to retard rural-urban migration. However, analysts have also pointed out that the question of accessibility and affordability- both remain critical in rural areas. It must not be forgotten that a significant portion of the society still does not have access to modern sources of energy on grounds of both physical inaccessibility and affordability.

There has been a remarkable increase in the demand for power in South Asia because of rapidly increasing domestic demand on account of both changing needs of the consumers and the emphasis on the power driven industrialization particularly in the aftermath of the liberalized economic regimes in most of the countries in the region. This matrix within South Asian countries has remained in an awkward state for many years because of policy makers being forced to choose between social objective of power distribution and its commercial use based economic growth. It needs to be noted here however that in Bangladesh the pattern and composition of energy availability and consumption are undergoing significant changes mainly because of the increasing exploitation of hitherto unharnessed natural resources including hydel resources, renewable energy and natural gas. There has been some movement forward in Nepal and Bhutan in the hydel sector and this has opened up a promising scope in the arena of regional cooperation and integration. It also needs to be remembered in this context that the possibility of offshore gas reserves in Bangladesh has also opened another window of opportunity for the SAARC region in the energy field. Over the long term, Hydroelectricity and Gas energy resources can substitute for those energy resources which damage the environment.

In this context one is reminded of a seminar held in Dhaka in May 2004, where Professor Amarta Sen, pointed out that the possibility of power purchase has opened new vistas of cooperation. It was explained that cross border power trade could inter alia lead to i) effective utilization of natural resources, ii) increase in reliability of power supply, iii) mutual support during contingencies to the economy in operation, iv) large scale transformation in the sectors contributing to economic growth and v) act as the single most effective confidence building measure through the participation of multiple stakeholders. Arunoday Mukharji in October, 2021 highlighted some interesting aspects related to energy consumption and availability in the context of India. It was pointed out that India is on the brink of an unprecedented power crisis. More than half of the country’s 135 coal-fired power plants are apparently running on fumes – as coal stocks run critically low. In a country where 70% of the electricity is generated using coal, this is being seen as a major cause for concern as it threatens to derail India’s post-pandemic economic recovery.

Apparently, this crisis has been evolving for nearly a year. As India’s economy picked up after the deadly second wave of Covid-19, demand for power also rose sharply. Power consumption also has jumped by almost 17%, compared to the same period in 2019.
At the same time global coal prices have increased by nearly 40% and India’s imports have consequently fallen to a two-year low. It may be noted here that India is the world’s second largest importer of coal despite also being home to the fourth largest coal reserves in the world. Power plants that usually rely on imports are now heavily dependent on Indian coal, adding further pressure to already stretched domestic supplies.

It is understood that India’s Power Ministry is trying its best to resolve the problem but is facing many challenges. Ms Zohra Chatterji, the former Chief of Coal India Limited – a state-run enterprise responsible for 80% of the country’s coal supply has remarked in this regard that -“Electricity powers everything, so the entire manufacturing sector- cement, steel, construction – everything gets impacted once there is a coal shortage.” She has also called the current situation a “wake-up call for India” and underlined that the relevant authorities need to understand that time has come to reduce its over-dependence on coal and more aggressively pursue a renewable energy strategy. One presumes that this will be consistent with what has been highlighted last year during the Climate Conference in Glasgow, UK. Experts over there had advocated a mix of coal and other clean sources of energy as one possible long-term solution. This format could possibly be taken forward through strategic cooperation within the South Asian paradigm.

(Muhammad Zamir, a former Ambassador, is an analyst specialized in foreign affairs, right to information and good governance, can be reached at <[email protected]>)