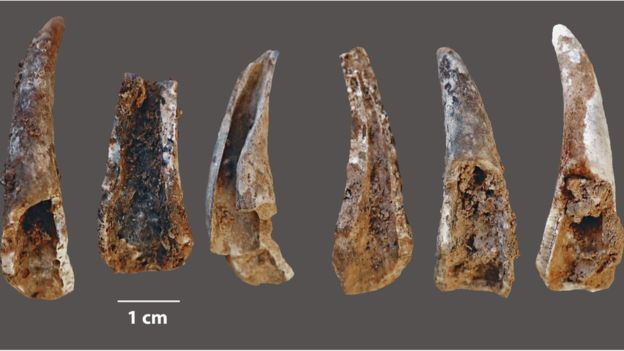 BBC News: [2] Neanderthals were eating fish, mussels and seals at a site in present-day Portugal, according to a new study. [3] The research adds to mounting evidence that our evolutionary relatives may have relied on the sea for food just as much as ancient modern humans. [4] For decades, the ability to gather food from the sea and from rivers was seen as something unique to our own species.

[5] Scientists found evidence for an intensive reliance on seafood at a Neanderthal site in southern Portugal. Neanderthals living between 106,000 and 86,000 years ago at the cave of Figueira Brava near Setubal were eating mussels, crab and fish – including sharks, eels and sea bream – seabirds, dolphins and seals.

[6] The research team, led by Dr João Zilhão from the University of Barcelona, Spain, found that marine food made up about 50% of the diet of the Figueira Brava Neanderthals. The other half came from terrestrial animals, such as deer, goats, horses, aurochs (ancient wild cattle) and tortoises. Read more