Nato should talk less and do more, or Ukraine will be torn apart, bit by bit 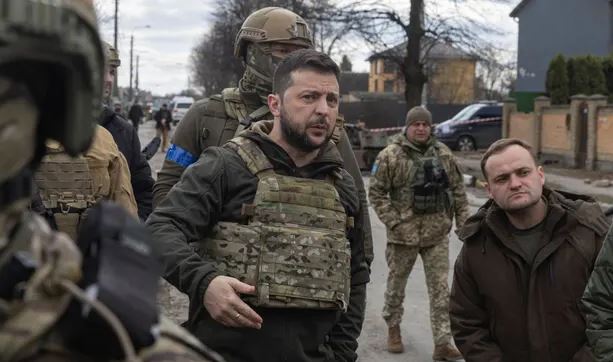 Joe Biden says Vladimir Putin’s Russia is committing genocide in Ukraine. Lawyers may differ, but he’s probably right. So will the US intervene to stop it? Sadly, no. Kyiv badly needs fighter jets and, for example, M1 Abrams main battle tanks to halt the atrocities. Will it get them? No, again. What Ukraine gets far too much of is gesture politics. If and when all its people are dead or uprooted, Biden can say: “I told you so.” This will be no great consolation.
The gulf between what western leaders provide and what Ukraine actually requires to survive grows potentially fatal as a huge Russian offensive looms in the east. Russia’s defeat around Kyiv was epic. So, too, is the sinking of the Moskva battle cruiser. But such victories may create a misleading impression about the overall direction of the war.
Even Russian generals, if they stay alive, learn from their mistakes. Ukraine’s darkest hour may just be beginning.
Western democracies, grouped around Nato, have done a great deal to help, but not nearly enough. The problem starts with the US, the alliance leader, and it’s a familiar one. Polls suggest most Americans support Ukraine but don’t want US forces directly involved. That’s Biden’s personal instinct, too. A war in Europe looks very different when viewed from Paris, Texas than from Paris, France. It lacks that certain existential edge.
Direct, limited Nato military intervention on the ground to create safe havens in western Ukraine, for example, or to target in-theatre artillery, naval and missile forces that bomb civilians, is entirely feasible. The mere threat might give Russia pause. Yet Biden will not hear of it. His fear that it would automatically escalate into all-out Nato-Russia warfare is almost certainly unfounded. Putin knows he would lose such a fight. But who dares put it to the test?
That leaves two options: arms and sanctions. But here, too, the west still dithers. When Volodymyr Zelenskiy, Ukraine’s president, appeals, as he does daily, for an immediate embargo on Russian oil, gas and coal exports, he again runs up against a mix of western caution, indecision and self-interest.
The EU, for example, is haggling endlessly over a possible oil ban. Yet without such measures, Ukraine’s life chances will greatly diminish over time.
The US, like Britain, is expanding the range and quality of the “defensive” weaponry it supplies. Biden’s latest $800m package includes helicopters, armoured personnel carriers, radars and drones. The Pentagon has asked the US military’s eight largest defence contractors to help find ways to arm Ukraine faster and better. This, incidentally, represents a de facto western escalation to which Putin has now formally objected.
Perhaps Russian use of chemical or biological weapons will be the step that triggers a war-changing US response. Majorities of Americans say they would back military action if such illegal weapons are used or if a Nato ally is attacked. The White House, which says it is readying “proportional” non-military retaliatory options, evidently lags behind public opinion.
All western governments will ultimately be to blame if Ukraine falls or is partitioned east from west, like Germany in 1945. Britain’s Boris Johnson has accumulated much kudos as Zelenskiy’s self-appointed new best friend. Yet while the UK has provided seriously effective anti-tank weapons, it dutifully toes Washington’s line on planes, tanks and ground troops.
Johnson, hamming it up as the British lion in Kyiv last weekend, claimed “Putin’s monstrous aims are being thwarted … We are convening a global alliance to bring this tragedy to an end.”

This is plainly untrue. Half the world, including China and India, is unsupportive. And the end is not nearly in sight – which an honest man would admit. Each day more crimes are committed. And the loathsome Putin waxes cocky about his “noble” war.
Germany, Europe’s supposed leader, is another sorry case. Chancellor Olaf Scholz says those who perpetrated atrocities in the town of Bucha “must be held accountable”. But that day of reckoning remains a distant dream as long as Scholz continues to reject national and EU-wide energy sanctions and argue over arms supplies. “I don’t understand how anyone in Germany can sleep at night,” said Andriy Melnyk, Ukraine’s ambassador to Berlin. “What does it take for Germany to act?”

The smaller the European nation, the bigger its contribution, or so it often seems. Lithuania, Latvia and Estonia have all stepped up boldly, as have Slovakia, the Czech Republic and Poland. They fear they could be next. Now anxious Finland and Sweden are aiming to join Nato. Having managed without its help throughout the first cold war, they’re just in time for the second.

Ukraine’s forces will doubtless fight valiantly in the coming battle for the east. But by some estimates they will be outnumbered five to one. Casualties will inevitably be high, while perhaps the best outcome they can hope for is stalemate. And yet, as this horror unfolds, US-led Nato, the world’s most powerful military alliance, will sit on its hands, apparently prepared, if need be, to watch Ukraine dismembered bit by gruesome bit.

Without increased support, Zelenskiy predicts an “endless bloodbath”. Western leaders should talk less and do more – and if all else fails, be ready to intervene militarily.