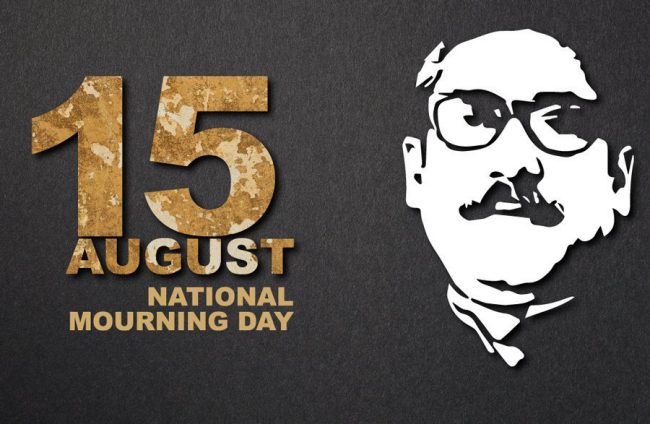 M Humayun Kabir: The nation is observing the 43rd martyrdom anniversary of Father of the Nation Bangabandhu Sheikh Mujibur Rahman, which is also the National Mourning Day, with profound shock and tribute today.
Elaborate programmes have been taken by the government, ruling Awami League, its front and associate bodies, and different socio-cultural, political and professional organisations to mark the darkest day of national history, reports the Daily Sun.
The self-confessed killers of August 15 did not assassinate Bangabandhu alone, but also killed 16 other members of his family, friends and relatives.
They include Bangabandhu’s wife Begum Fazilatunnesa Mujib, sons Sheikh Kamal, Sheikh Jamal and Sheikh Russell, daughters-in-law Sultana Kamal and Rosy Jamal, brother Sheikh Naser, brother-in-law Abdur Rab Serniabat, nephew and eminent journalist Sheikh Fazlul Huq Moni, his pregnant wife Arzoo Moni and Colonel Jamil.
As a mark of respect to the martyrs of August 15, 1975 carnage, the programmes will begin with hoisting of the national flag at half-mast and raising of black flags atop public and private buildings, including Bangabandhu Bhaban.
Wearing black badges, hundreds of people from all walks of life will throng the Bangabandhu Memorial Museum on the historical Road No. 32 in Dhanmondi residential area since the morning to pay profound homage to Father of the Nation.
President Abdul Hamid and Prime Minister Sheikh Hasina will lay the wreaths separately at the portrait of Bangabandhu.
Special munajat will be offered seeking eternal peace of the departed souls.
Later, the Prime Minister will go to Banani Graveyard in the city and pay homage to her mother Bangamata Fazilatun Nesa Mujib, Sheikh Kamal, Sheikh Jamal and Sheikh Russell and other martyrs of August 15 by placing wreaths and spreading flower petals on their graves.
She will also offer Fateha and doa seeking eternal peace of the departed souls of the martyrs of August 15.
Apart from Dhaka, thousands of mourners from all strata will also gather at the mausoleum of Bangabandhu at Tungipara to pay deep respect to Father of the Nation.
The Prime Minister is set to pay homage to Father of the Nation Sheikh Mujibur Rahman by placing a wreath at his mazar at Tungipara at 10 am.
She will also offer munajat at the mazar seeking eternal peace of departed souls of the Father of the Nation, Bangamata Begum Fazilatunnesa Mujib and other martyrs of August 15, 1975 massacre.