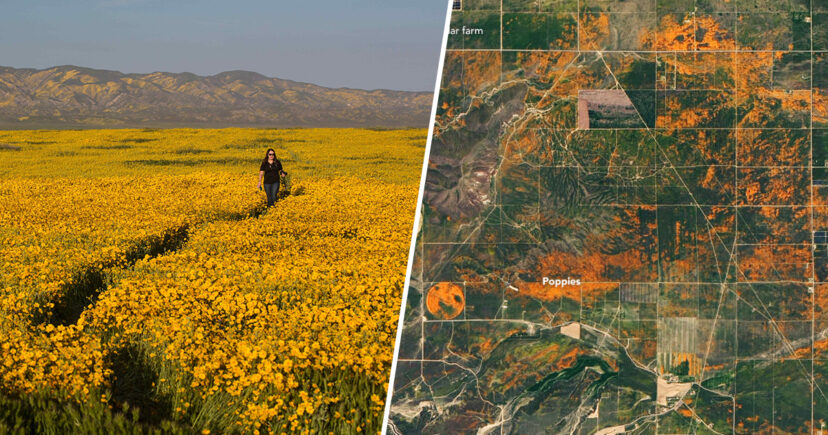 Unilad: [2] If you’ve ever imagined what a field of bright orange poppies looks like from space – specifically, a California superbloom – I’ve got just the thing for you. [3] Well, NASA does anyway because the space agency has released images showing exactly that, using satellites deployed by its Space Observatory.
[4] The pictures captured using the agency’s Operational Land Imager on April 14 show the flowers at the Antelope Valley California Poppy Reserve in all their glory, with the poppies thought to be at or near their peak at the time the images were taken.
[5] According to a statement released by NASA, the flowers bloomed after Southern California received ‘significant’ rainfall in both March and April this year.
[6] The Antelope Valley California Poppy Reserve is a state-protected reserve of California, harbouring the most consistent blooms of California poppies – the state flower – each year. [7] State park interpreter Jean Rhyne has previously said the bloom time changes every year, adding: ‘Generally, it happens early in April, but it can take place any time between mid-March and early May.’
[8] While a bloom occurs each year, a superbloom – a rare phenomenon in which an unusually high proportion of wildflowers blossom at roughly the same time – does not, making these images all that more special.