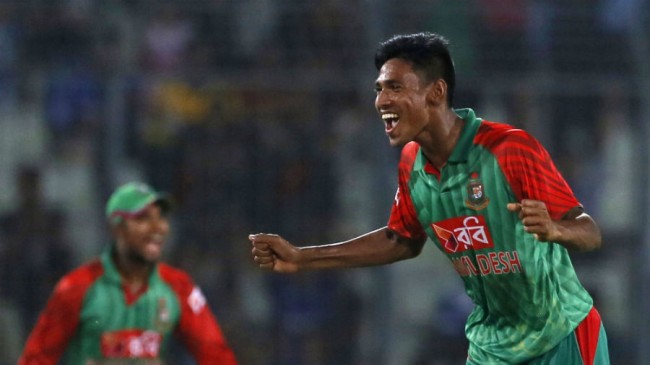 Md. Taqi Yasir
Barney Ronay, senior sports writer of The Guardian, carried out a research upon the Bangladeshi mystery man famous for his off cutters and producing some other astonishing deliveries Mustafizur Rahman. The man who had consecutive five wickets hauls against the superpower India in the first two matches of his career, which had a wide range of influence in Bangladesh’s series win against the neighbor and taking a successful revenge against them for the World Cup 2015 incident. Mustafizur’s bowling also contributed Bangladesh to win their series in the later part of 2015 against South African overpowered ODI team.
Barney says that his most favorite player right now in the cricketing field is Mustafiz for his regular bowling variations and fake foot obligations. Mustafiz also proved his might to the whole world being the one of a kind at the sales of auctions at different major T20 leagues of the world. The world-catching tournament Indian Premier League T20 had a greater demand over this wonder, and finally Sunrisers Hyderabad bought them at £150,000. In the Bangladesh Premier League, he played for Dhaka Gladiators and the Pakistan Premier League team Quetta Gladiators bought him, but injury did not allow him to play.
After the World Cup T20 and the IPL 9, his next big step will be playing at a very different condition, the classic form of a cricket tourney, from where the branding of cricket started, The County T20 league known as Sharks’ NatWest T20 Blast campaign, and its ODI format. Sussex County Cricket Club signed him for their tourney. The other stardust breakers to play in county are Shakib Al Hasan and Tamim Iqbal.
Mustafizur’s statistics says it all. The speculate creature bowled only 824 balls to get 43 along with five-hauls in 3 ODIs. This boy from Tetulia, Satkhira one of the most rural parts of Bangladesh, who is shy and a skinny left-armer is now a franchise of world cricket.
The method of Mustafizur’s bowling is not bowl quick and speedy balls, giving bouncers or swinging it too much. Rather, he bowls at 90 degrees from his point of release. He mixes it up with a combination of medium pace, and finds a space to cut the ball to find an edge of the bat through and to the keeper’s gloves. Mixing the cutter with some regular angle swings to hit the stumps directly. He also aims at the jigsaw leg before wickets, which he does so good.
Presently he is suffering from wrist injury, which held him back from playing the finals of the Asia Cup. Barney subtly stated that, it was a process to hold him back for the bigger event from eighth of March. That is why; Bangladesh Cricket Board is hiding their Agent X right now. The fans expect from the agent to put up with its charismatic show in the big event of the cricket’s limited edition.