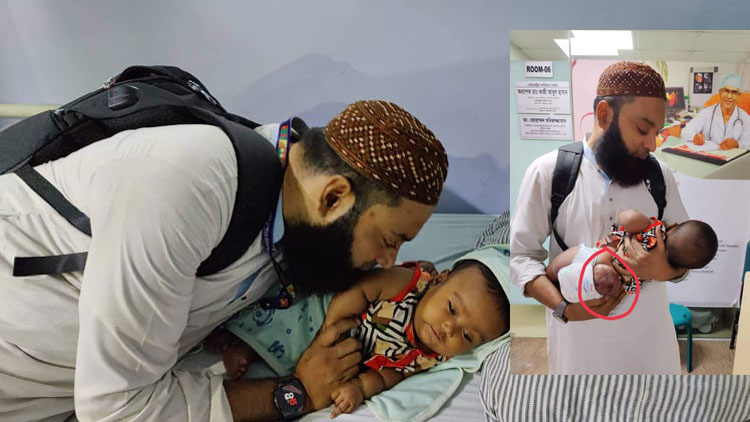 Many ages have passed. People are running after money and fame. However, in this mortal world, there are many exceptions as well. Some people give up worldly fascinations and choose the service of humanity. They find ultimate happiness in serving the creation. They spread the ideology of prophet (sm:) among the afflicted and deprived ones. Muhammad Raj is one of those who put smiles on the faces of sorrowful people and provide love for the Almighty to their hearts. Through the project “Jannater Khoje”, he has already put smiles on the thousands of helpless people’s faces.

Often we hear about the unclaimed dead bodies. How many of you have heard of the unclaimed patients? Homeless patients are seen in hospitals, clinics, sidewalks or different places. Muhammad Raj finds out about these patients. He arranged for their treatment.

Muhammad Raj said, “once I was a follower of a different religion. By the grace of Allah, I have an opportunity to take shelter under the cool shade of Islam, to do something for humanity. That’s why I have decided to spend this small life in human service in search of paradise. My addiction is to work with homeless patients.”

The journey of ‘Jannater Khoje’ started in 2020. Muhammad Raj started looking for the helpless, beggars and homeless sick people of the society and buying medicines for them. It can be said that this is an exceptionally successful initiative of his organization “Hafezji Charitable Society of Bangladesh”. Under this project, about ten lakhs taka has been spent on the treatment of helpless people in the last year. All of them are funded by the individual efforts and activities of Raj.

“Jannater Khoje” works for several expensive initiatives including all the expenses for the treatment of a cancer patient Abdullah at Badda in Dhaka, the heart operation of a young madrasa student Talha, completion of 14 chemotherapy and the next treatment of a 6-month-old child with cancer at Jaintapur in Sylhet, Farihar’s lung operation, full support for the wife of a helpless doorman, the medical aid of a female Islamic scholar, the medical aid of a student with a complex disease including tuberculosis, the gynecological operation for the wife of a jobless brother, full medical expenses for a breastfed baby of a helpless Islamic scholar, getting leakage in the heart.

Muhammad Raj recently took charge of a tumor operation for Malasi in Kushtia. Malasi is a four-month-old child of a day laborer. Water has accumulated all over the body including the head, and large tumors are found in the waist. Muhammad Raj has taken responsibility for all the treatment including the operation of the child. He took happiness for the sad parents. He is being extremely praised on social media for this initiative.

Muhammad Raj’s collaborators are Amirul Islam, an associate professor of the mathematics department at the Open University; Muhammad Al-Amin, the media wing of the SAARC Human Rights Foundation; and Abed Ali, the secretary-general of the SAARC Human Rights Foundation.
Muhammad Raj is carrying out these service activities mainly with the help of his known people, religious brothers and sisters, and through announcing on social media.

Mohammad Raj, this newly Muslim, is continuously working for achieving the satisfaction of the greatest lord, in search of Paradise, the source of peace in eternal life. He is raising funds through his own efforts and distributing them among the helpless people. However, if the established personalities of the society and some more generous and noble people were his companions in this great work, he could go further with more courage in the service of the neglected, miserable and downtrodden people in the society.

May the people, keeping the sick ones good, be well. May humanity win.