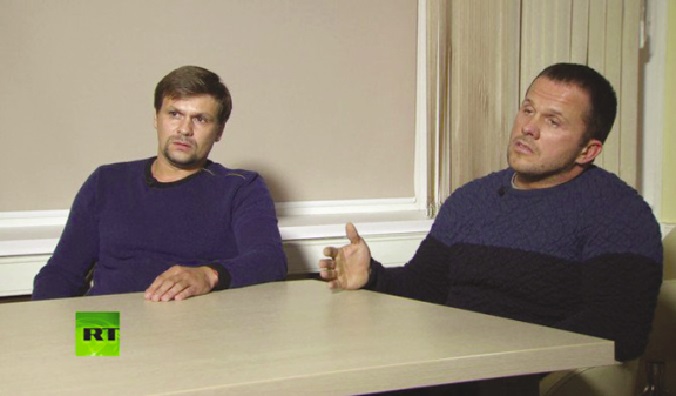 AFP
Moscow has scoffed at a report by a respected investigative group claiming that one of the suspects in the poisoning of ex-spy Sergei Skripal was a highly decorated colonel in Russian military intelligence.
Bellingcat, the British based investigative group, said Wednesday that the real name of Ruslan Boshirov is Anatoly Chepiga, a military intelligence colonel decorated with the country’s top award, the Hero of Russia.
Russian foreign ministry spokeswoman Maria Zakharova dismissed the report, saying it was timed to coincide with the address at the UN Security Council of British Prime Minister Theresa May.
“There is no proof — so they are continuing their information campaign whose main task is to divert attention from the main question: WHAT HAPPENED IN SALISBURY?” Zakharova wrote on Facebook late Wednesday.
“The question remains: when will any proof be provided of involvement of anyone in the Salisbury poisoning, as London calls it?“
Speaking on Wednesday, May attacked Moscow over the poisoning Skripal and his daughter Yulia with Novichok, a nerve agent designed in the Soviet era, in March.
“Russia has only sought to obfuscate through desperate fabrication,” she said.
Bellingcat said Chepiga, 39, graduated from the Far-Eastern Military Command Academy in the far eastern city of Blagoveshchensk, one of the country’s top training grounds for marine commandos and special forces.
He fought in Chechnya and possibly Ukraine and was bestowed the Hero of Russia award in 2014 for “conducting a peace-keeping mission,” a likely reference to the Ukraine conflict.
Bellingcat said it was “highly likely” that Russian President Vladimir Putin knows Chepiga because he personally hands out these awards.
Only a handful of such awards are given each year, often posthumously.
Citing a former Russian military officer, Bellingcat said it was very surprising that a highly decorated officer holding the rank of colonel was sent into the field.
It “would imply that ‘the job was ordered at the highest level,’” the group quoted its source as saying.
This month Putin said that the two men suspected by Britain of poisoning the Skripals were “civilians.”
In an eyebrow-raising interview with the Kremlin-backed RT channel, Boshirov and Alexander Petrov said they went to Salisbury as tourists, sparking ridicule in Russia and abroad.
Some observers have speculated the two intelligence agents have been effectively thrown under the bus by their superiors for failing in their mission.
“From hero to zero,” Bellingcat said on Twitter as it released its report.