Mexico to re-inspect dump for bodies of missing students 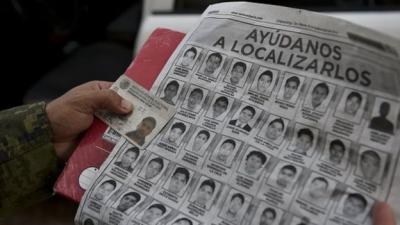 A new probe is under way of a
garbage dump where investigators believe the bodies of 43 missing Mexican students were incinerated, the attorney general’s office said Sunday.

Independent experts and victim relatives had earlier rejected the theory that the remains of the slain students from the rural teacher college in Ayotzinapa, who went missing in September 2014, were burned at the Cocula municipal dump, in southern Guerrero state.

But the Mexican attorney general’s office said in a statement that
specialists were already carrying out a new probe of the dump, and that results will be delivered before March 31.

Students from the teacher college were attacked by Iguala police on
September 26, 2014, after the students hijacked buses that they wanted to use for a future protest.

That same night, according to the authorities, the officers took 43
students and handed them over to the Guerreros Unidos drug cartel, which killed them, incinerated their bodies at a garbage dump and tossed the remains in a nearby river.

Experts from the Inter-American Commission on Human Rights and Argentine forensic investigators went to the dump and said there was no scientific proof that a large fire was set there.

The Argentine Forensic Anthropology Team said in mid-February that there was “no consistency between the physical evidence” and the testimony of drug gang suspects who claimed that the students were killed and burned at the site.

The attorney general’s office said Sunday that all of the evidence will be presented to experts before they issue their own report.

President Enrique Pena Nieto has endured a firestorm of criticism for the government’s failure to solve the case.

More than 26,000 people have vanished since the government expanded the war on drug trafficking cartels in 2006.