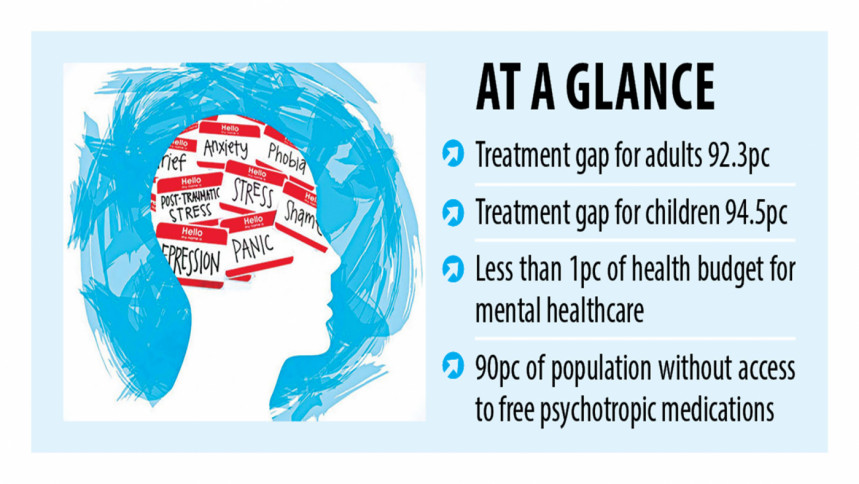 OT Desk: In Bangladesh, nine out of every 10 people with mental health issues do not receive treatment, according to the most recent National Mental Health Survey of Bangladesh,reports thedailystar.
Data collected from the survey show that the current treatment gap for adults is 92.3 percent and for children is 94.5 percent.The government spends less than one percent of its total health budget on mental healthcare. Of the total expenditure, two third is dedicated to mental hospitals only, while around 90 percent of the population does not have access to free essential psychotropic medications.
The findings were revealed at a roundtable, titled “Mental Health: Role of Media”, jointly organised by Life Spring and The Daily Star, in the capital’s The Daily Star Centre yesterday.Dr Sayedul Ashraf, lead psychiatrist of Life Spring, during his keynote speech, said, “Addressing mental health in Bangladesh requires a coordinated effort from all stakeholders, with media being an irreplaceable one.”
“People have huge expectations from journalists. But the level of stress journalists are under while dealing with negative news remains mostly unaddressed,” said Syed Ashfaqul Haque, executive editor of The Daily Star.
He also discussed the risk factors the frontline journalists faced during the pandemic as seven on-duty journalists died due to lack of protective gear, while their families got no compensation.”Many journalists lost their jobs during the pandemic. If we have expectations from them, we must rethink addressing their mental health issues as well,” he further added.
Prof Md Kamal Uddin, chairman of the psychology department at Dhaka University, stressed the need for sensitising journalists with proper training and education in reporting mental health issues.

Physician and media personality Dr Abdun Noor Tushar said, “The country has only 400 clinical psychologists for 16 crore people. The number of mental health facilities is way less, while the general hospitals do not have the opportunity to treat this huge population.”
He also stressed how society’s norms have contributed to the increasing number of suicide in recent times, as parents tend to see the success of children as their own.
Naziba Basher, sub-editor of The Daily Star, shed light on how reporters and sub-editors can sensitise their reports to people with mental health issues and victims of post-traumatic stress disorder.
“Each and every word used in a report related to trauma, suicide, and abuse, has to be curated very carefully. In terms of reporting on a rape victim’s battle to get justice, we can and should fight alongside the victim,” she added.
Mst Hasina Khatun, member of the Bangladesh Clinical Psychology Society, urged the need for the collaboration of journalists and mental health professionals and training for the reporters in dealing with reports related to mental health issues.
She also urged the journalists to follow the “Preventing suicide: a resource for media professionals” while covering deaths by suicide.
Shafiqul Alam, AFP bureau chief, focused on the need for addressing the mental health issues of local media journalists.
Prof AAMS Arefin Siddique, former Vice Chancellor of Dhaka University; Prof Jhunu Shamsun Nahar, former chair of the psychiatry department, BSMMU; Azim Hossain, general manager, Channel I Digital; Farzana Akter, lecturer of clinical psychology, Dhaka University; Abu Sayeed Khan, advisory editor, The Daily Samakal; spoke at the event moderated by Yahia Md Amin, lead psychologist of Life Spring.