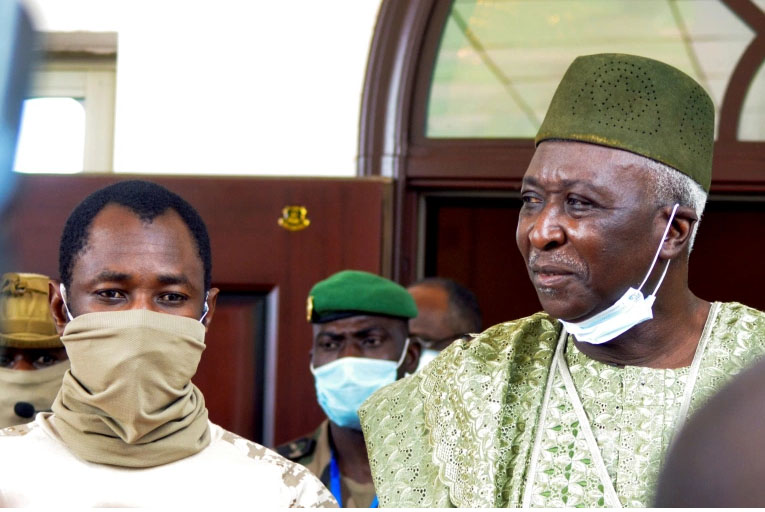 Malian army officers angry with a government reshuffle have detained President Bah Ndaw and Prime Minister Moctar Ouane, who were appointed in September under international pressure with the task of steering the country back to full civilian rule in the wake of an August 2020 coup.
Colonel Assimi Goita, the leader of last year’s power grab and vice president of the interim government, accused the pair of violating the transitional charter and said elections will take place next year as planned.
With Mali facing yet another political crisis nine months after the overthrow of President Ibrahim Boubacar Keita, here is a timeline of all the major political developments in the country:
In the early hours of August 18, after months of anti-government protests, mutinous soldiers take up arms at a key base in Kati, a garrison town some 15km (nine miles) from the capital, Bamako, while armoured tanks and military vehicles are seen on the streets.
A few hours later, Keita and Prime Minister Boubou Cisse are detained by military officers, in a dramatic escalation of the country’s months-long crisis.
At around midnight, Keita, whose term was set to expire in 2023, announces that he is resigning from his post, saying he does not wish blood to be shed.
In the early hours of August 19, the military officers who overthrew Keita pledged to restore stability and oversee a transitional period until elections are held within a “reasonable” timeframe. The coup makers, who call themselves the National Committee for the Salvation of the People (CNSP), also say that “a transitional president” will be appointed either from civilian or military ranks.
The coup, however, is widely condemned by the international community, with the main regional bloc, the Economic Community of West African States (ECOWAS), suspending Mali from its institutions, shutting borders and halting financial flows with the country.
On August 20 and 21, opposition supporters flood into Bamako’s central square to celebrate Keita’s overthrow, hailed by their leaders as a “victory of the Malian people”.
On August 22, a key meeting between Mali’s coup leaders and ECOWAS mediators seeking a return to civilian rule ends after just 20 minutes.
The military government wants a military-led transitional body to rule the country for three years and agrees to release Keita, an ECOWAS source says
On September 5, the military government begins talks with opposition groups in Bamako. However, less than an hour after the opening ceremony, supporters of the June 5 Movement (M5-RFP) – which spearheaded the demonstrations that led to the toppling of Keita – begin to protest, accusing the military government of excluding them from most working groups.
Also on September 5, Keita leaves the country seeking medical treatment in the United Arab Emirates after being hospitalised in Bamako following his 10-day detention. On September 10, about 500 people in Bamako attended a three-day “national consultation” among political parties, unions and members of civil society groups to mark the second round of discussion to map a way forward to return the country to civilian rule.
On the second day of the talks, on September 11, experts appointed by the military rulers propose a two-year transitional government led by an interim president chosen by the army.
On September 13, the military government pushes through a political charter to establish an 18-month transitional government with the appointment of a soldier or a civilian as interim president before elections are held.
On the same day, the M5-RFP rejects the charter, accusing the military rules of a “desire to monopolise and confiscate power”.
On September 21, Mali’s former Defence Minister Bah Ndaw is named as president of the country’s new transition government, while Goita is appointed vice president.
On December 31, the public prosecutor’s office says that six people, including Cisse, the prime minister before the August coup, were under investigation for “plotting against the government, criminal association, insulting the head of state and complicity”.
On April 15, the transitional government announces that the presidential and legislative elections will take place in February 2022. The first round of voting will take place on February 27, with a second round following in March. Lieutenant Colonel Abdoulaye Maiga, the minister of territorial administration, says the dates “strictly uphold” promises of an 18-month transition for returning to an elected government. Ouane resigns as prime minister on May 14, just days after the M5-RFP opposition movement demanded the dissolution of the transitional government in the face of growing anger about the military’s prominent role and the slowness of reforms. But Ouane is then immediately reappointed to carry out a reshuffle as the country’s interim government is set to form a new “broad-based” cabinet in the face of the growing criticism.
On May 24, the government reshuffle is announced. The military keeps the strategic portfolios it controlled during the previous administration in the reshuffle, but two coup leaders – ex-Defence Minister Sadio Camara and ex-Security Minister Colonel Modibo Kone – are replaced. Hours later, soldiers detain both Ndaw and Ouane. In a statement read on public television on May 25, Goita says Ndaw and Ouane had been stripped of their duties for seeking to “sabotage” the transition, which would “proceed as normally, and the scheduled elections will be held in 2022”.