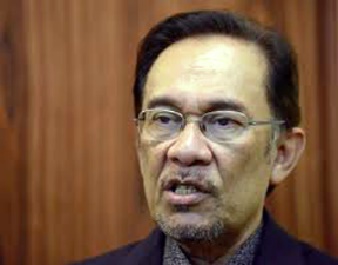 Arab News: Malaysia’s designated prime minister-in-waiting, Anwar Ibrahim, said Saturday that he has no reason to doubt his former political nemesis will hand over the leadership position within two years as planned after sorting out deep-seated issues like corruption. Anwar and Prime Minister Mahathir Mohamad put aside their 20-year feud to help their four-party alliance win elections in May, leading to the country’s first change of power since independence from Britain in 1957.
Anwar, 70, was convicted of sodomy in 2015 in a case that he said was politically motivated. He was freed and pardoned by the king shortly after the recent elections.
The alliance had agreed that Mahathir would be prime minister and then hand over the reins to Anwar. On Saturday, Anwar said that contesting a by-election after a lawmaker from his party resigned earlier in the week was “well within the plan” of his eventual succession, but that he was in no rush to take over.
“I think the succession plan is as agreed,” Anwar said. “Let Prime Minister Mahathir conduct the affairs of the state. We support him, that’s important. And I don’t think we should be rushing to it, because he’s playing a very critical role for the country.”
“The country needs stability and a strong leader now and I want to make sure that he is effective in his position,” he added.
Anwar spoke to reporters on the sidelines of the Singapore Summit, which was attended by business leaders and academics from Asia.
He said he has a close relationship with Mahathir and sees no reason to doubt his sincerity, given how he has acted in the four months since the historic electoral victory.
The government has clamped down on corruption by making the country’s anti-corruption body accountable to Parliament instead of just the prime minister, Anwar said.
It also has recovered millions from the $4.5 billion that reportedly was misappropriated from the indebted 1MDB Malaysian state investment fund, he added.
Former Malaysian Prime Minister Najib Razak is facing seven charges of criminal breach of trust, abuse of power and money laundering involving the transfer of 42 million ringgit ($10.2 million) into his bank accounts from SRC International, a former unit of the 1MDB fund.
Mahathir, 93, has endorsed Anwar’s move to contest the by-election and said he would not renege on his promise to hand over power, despite not having settled on a date.
A by-election will be held in the southern coastal town of Port Dickson after a lawmaker from Anwar’s party resigned to make way for his comeback. The Election Commission will set a date for the vote, which must be held within two months.