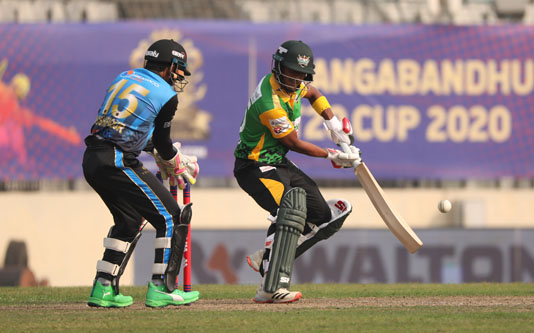 DOT Desk:[2] Mahedi Hasan struck a brilliant half-century and then successfully defended nine runs in the last over to help Minister Group Rajshahi pull off a two-run win over Beximco Dhaka in the first match of the Bangabandhu T20 Cup at the Sher-e-Bangla National Cricket Stadium yesterday,reports BSS.[3] Batting at No. 7 position, Mahedi blasted 50 off 32, hitting three fours and four sixes, which not only rescued Rajshashi from a precarious 65-5 but also guided them to a respectable 169-9.[4] Mahedi who grabbed 1-22 in bowling, also defended 9 runs in the last over against a rampant Muktar Ali who struck 20 out of 21 with three sixes in the penultimate over to make Dhaka absolutely favourite to win the game.
[5] But Mahedi’s intelligent bowling curbed Muktar’s aggression and allowed him to take just 6 runs, including a run from no ball. And hence Mahedi outshined Muktar who also showed an all-rounder performance and scripted the side’s victory from the jaws of defeat. Dhaka eventually was restricted to 167-5.[6] But despite being reduced to 55-3, Dhaka was on course of a victory thanks to Mushfiqur Rahim and Akbar Ali, who shared 71-run for the fourth wicket stand. Akbar Ali was dismissed for 34 off 29. Nevertheless it mattered little as Mushfiqur seemed to be at his best. And when he looked all set to anchor the side’s victory, he played an injudicious scoop shot against Ebadot Hossain to give a catch behind the wicket for 41.[7] Muktar Ali, who bagged 3-22 in bowling, then revived the hope with his aggressive batting but despite scoring 27 off 16, he couldn’t finish his job in the last over, largely due to the Mahedi’s brilliance.

Mahedi earlier rescued Rajshahi from a potential danger after their middle failed to capitalize on a decent start provided by the openers.

Being sent to bat first, captain Nazmul Hossain Shanto and young Anisul Islam Emon shared a 31 runs in the fourth over, which was not so bad start considering the format of the cricket.

Shanto clattered two sixes in his 17 off 16 before being dismissed while Emon, who was indicted to score a big knock was stumped after scoring 23 ball-35 with five fours and one six.

Rajshahi’s middle order consisted of the national discard but experienced trio of Rony Talukdar, Mohammad Ashraful and Fazle Rabbi but all of them failed to reach double digit figures, leaving Rajshahi at tricky 65-5.

When it looked like Rajshahi could be wrapped up below 100, Mahedi Hasan and Nurul Hasan Sohan counterattacked in style, sharing 89-run for the sixth wicket stand.

Sohan hammered 39 off 20 with two fours and three sixes before an improvised shot saw him dismissed by Muktar Ali just after reaching his half-century.

Mahedi kept hitting all the things coming at him before a slower one from Mehedi Hasan Rana caused his dismissal. The lower order however couldn’t contribute much after his dismissal.