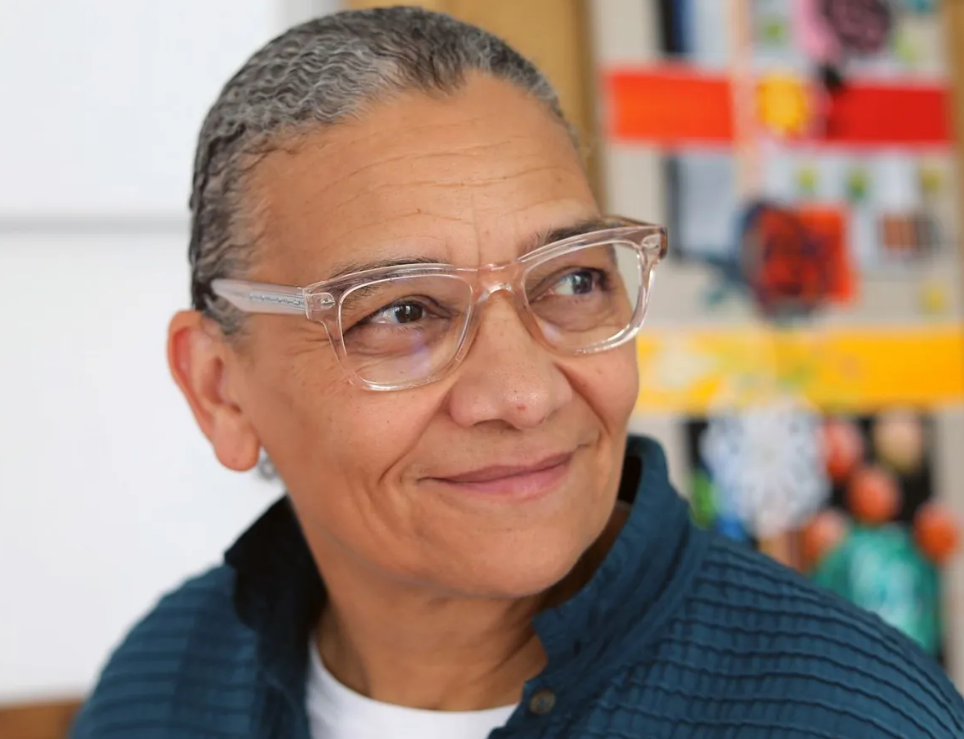 Painter Lubaina Himid says her work is not about making something pretty. “I don’t expect you to attend a show of mine and go: ‘It’s very beautiful’. That’s not what it is,” she tells BBC Culture over a video call. Instead, her paintings are designed to make people think about their relationship to history, and what gets left out of textbooks.
Himid is among the most influential black British artists alive today, and has been creating art for more than four decades. “Himid’s work has encouraged many to take risks – to re-think the places we inhabit, and incite the changes we want to see,” says Amrita Dhallu, co-curator of Himid’s retrospective at the Tate Modern, which opens this week. “She invites us to consider the kinds of spaces that inspire our creativity, and the materials we need to imagine and make freely. Works in the exhibition, which include paintings on canvas, furniture and textiles, are brought to life with sound and poetry.”
Himid was born in Zanzibar in 1954, and moved to England before her first birthday. As an adult, she studied theatre design at Wimbledon College of Art, and obtained a masters degree in cultural history at the Royal College of Art. But despite her studies, her art has predominantly taken a different turn. “I became more interested in drumming up real life [than making sets for plays],” she says.
In 2010, she was appointed MBE for her services to black women’s art; in 2017, she won the Turner Prize; and, in 2018, she was made a CBE. Her emotive artworks have also been purchased by high-profile people, including Italian art collector Valeria Napoleone, who has Her Prints on Me (2017) hanging in her home, as seen in W Magazine. Curator Zoé Whitley and artist Joy Labinjo have both cited her as a source of inspiration. “A key lesson I learned is one that Himid taught me early on: Listen to artists,” Whitley told Artsy.
“In the beginning, I was trying to fill in some of those gaps in history, and talk about individuals who had made cultural contributions in Europe,” Himid says of her early work, noting that she also looked at stories about Europe’s economy. The artist is soft spoken and measured in her responses, her hair scraped back in her signature loose bun. “I made a series of paintings around a French ship called the Rodeur, which sailed with captured Africans from west Africa to the Caribbean.”
On the ship, an untreatable eye disease spread rapidly through the enslaved people and the crew, and the “cargo” was drowned so that the traders could claim insurance. “Rather than paint hundreds of people in great distress and dying, I wanted to create something that conveyed a sense of absolute inability to understand what was happening.”
Himid’s painting Le Rodeur: Exchange (2016) depicts a group of well-dressed black individuals gathered in a contemporary architectural space. One figure has the head of a bird, while another holds a small piece of patterned fabric. The Tate exhibition’s co-curator Michael Wellen writes in the catalogue: “[The bird-like woman] rests her hand on the shoulder of a seated man, who seems lost in thought – yet her presence is not necessarily reassuring or protective. Her alert yellow eyes look at us.”. Wellen also points out that the tailored jacket of one of the other characters caused him discomfort. “On her jacket, a small eye – like a button – stares outwards,” he writes. “The detail of the eye on the woman’s jacket makes me want to back away, but it’s too late, I’m already in the scene, sensing the tension between the figures and wondering about my own relation to them.”