‘Loophole’ allowing for deforestation on soya farms in Brazil’s Amazon 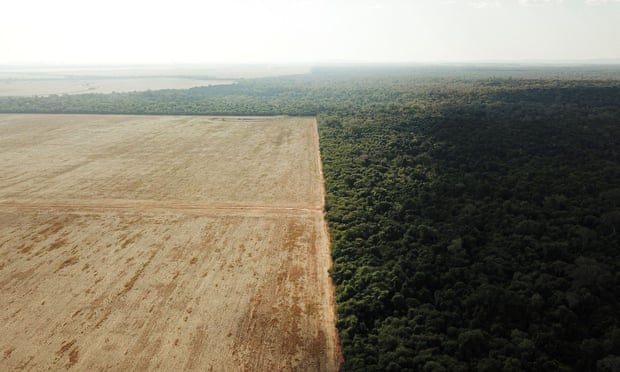 More than 400 sq miles (1,000 sq km) of Amazon rainforest has been felled to expand farms growing soya in the Brazilian state of Mato Grosso in a 10-year period, despite an agreement to protect it, according to a new investigation.
In 2006, the landmark Amazon soy moratorium was introduced banning the sale of soya grown on land deforested after 2008. From 2004 to 2012, the clearing of trees in the Amazon fell by 84%.
But in recent years deforestation has climbed steeply, reaching a 15-year high last year encouraged, campaigners say, by President Jair Bolsonaro’s anti-conservationist rhetoric and policies.
With the moratorium applying only to soya, farmers have been able to sell the crop as deforestation-free, while still clearing land for cattle, maize or other commodities.
To map the deforestation, researchers from the Brazilian NGO Instituto Centro de Vida, along with Greenpeace’s Unearthed and the Bureau of Investigative Journalism, looked at satellite data of land where soya was being grown in Mato Grosso state, which stretches across the southern part of the Amazon. The state grows more soya than anywhere else in Brazil.
They found that while studies show the moratorium had successfully stopped rainforest being directly converted into soya fields, deforestation had continued. Farmers were clearing land to grow commodities other than soya, with 450 sq miles of rainforest equivalent in size to Greater Manchester felled in Mato Grosso between 2009 and 2019, according to the research.
Holly Gibbs, professor of geography and environmental studies at the University of Wisconsin-Madison in the US, said: “At the same time that soy farmers comply with the moratorium, they continue to deforest illegally for other purposes.”
The revelations undermine claims by supermarkets that soya is no longer linked to the loss of Amazon rainforest.
Soya is a key commodity used by dairy, cattle, pig and poultry farmers in Europe and the rest of the world to feed their livestock.
The Brazilian Association of Vegetable Oil Industries (Abiove), the main association for soya traders in Brazil, said the moratorium had resulted in significant reductions in deforestation in municipalities that produce soya.
“If soy beans are planted in polygons [an area between a specified set of coordinates] with deforestation after 2008, the entire farm is considered noncompliant with the soy moratorium,” Abiove said a statement.
Previous analysis has suggested more than 1m tonnes of soya used by UK livestock farmers to produce chicken and other food in 2019 could have been linked to deforestation.
Gibbs said pressure from soya buyers in Europe and the US was needed to stop the deforestation. “Legislation in the EU, UK and the US raises the stakes of this ongoing deforestation on soy properties. The soy industry could consider broadening the Amazon soy moratorium to close the door to all deforestation connected to soy.”
Prof Raoni Rajão, an agricultural specialist at the Federal University of Minas Gerais, said the current regulations were insufficient. “Only the specific areas where soy is grown are monitored, not the entire property. Farmers have already noticed this loophole.”