Lookout for the Tigers at ICC T20 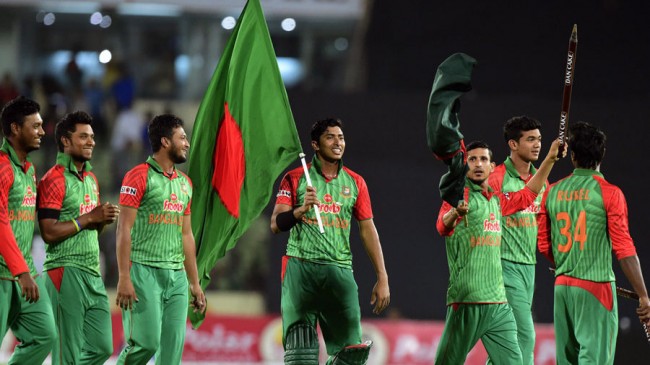 It took Bangladesh quite a long time to understand the format. But it seems Bangladesh has now unlocked the secret to cricket. They played a successful Asia Cup where they finished as runners-up. Now the question is can Tigers win their first major ICC tournament? I will give you a few reasons how they can claim the trophy. Youngsters Bangladesh Under’19 team excels at the recent U’19 World Cup. They finished third at the tournament and it will benefit their senior side currently which already has many promising young guns performing well. Mustafizur Rahman and Taskin ahmed, both 20 years old, are fine examples of this. Mustafizur Rahman is a huge success for Bangladesh while Taskin was in fact highest wicket taker for Tigers at the World Cup with nine wickets. Meanwhile Mustafiz had glory of becoming man of the match in his maiden Test and ODI and was named in the ICC ODI Team of the Year in 2015. He may have some injury problems but Bangladesh would desperately want his service for the World T20. Dark horse Bangladesh has been incredibly exciting of late, in ODI cricket. They knocked England out of 2015 World Cup and secured quarterfinal berth for the first time in their history. They beat almost everyone that has come their way. Their resounding series victory over Pakistan, India, South Africa and Zimbabwe made them a great threat. Bangladesh success apparently translated to the shortest format of cricket as they raced to the final of Asia Cup with victories over Sri Lanka and Pakistan. Though Bangladesh ended the Asia Cup disappointingly; they show great agility in their home condition. The tournament’s leading wicket-taker were, Alamin (11 wickets at an average of 12.18) and leading run-scorer, Sabbir (176 runs at an average of 44). In fact, 11 out of 18 wins in T20 have come on sub-continent soils. The sub-continent conditions are more or less same and for this reason Bangladesh will be a great threat to the non- sub-continent teams. The likes of Australia, New Zealand and South Africa should be troubled by this young side. The victory over Sri Lanka at the Asia Cup was Bangladesh’s first ever against the Lankans in T20 format. They beat the defending champions resoundingly and then beat Pakistan in a heady battle. They have an aggressive top three, a mature middle-order, an attacking late order and a formidable bowling attack that is starting to hold out hard-hitting batting line-ups. The fast bowlers know where to bowl in the late over’s to prevent the onslaught and they always have some good spinners too. They have to make use of their momentum in the World T20 and keep the consistency going. It took them more than eight years to do that in ODIs however that experience should help in the shortest format of the game.