Korea leaders in show of unity on mountain top 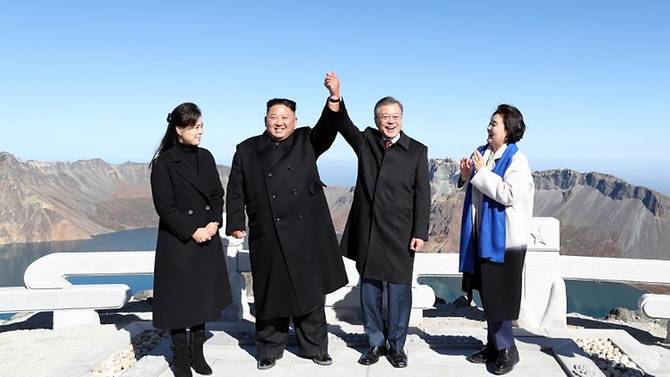 Arafat Hasan: Kim Kim Jong Un and Moon Jae-in visited the spiritual birthplace of the Korean nation yesterday in a display of unity after their North-South summit gave new momentum to Pyongyang’s negotiations with Washington.
The North Korean leader on Wednesday agreed to scrap the Tongchang-ri missile-testing site in presence of international observers, a move welcomed by Washington.
Pyongyang also said it could dismantle its best-known nuclear facility at Yongbyon, if the US takes “corresponding measures”, as Kim and the South Korean president held their third summit this year.

US President Donald Trump welcomed the move, tweeting that Kim had “agreed to allow nuclear inspections, subject to final negotiations.”

Secretary of State Mike Pompeo also praised the “important commitments”, saying he spoke with his North Korean counterpart and invited him to meet next week on the sidelines of the United Nations General Assembly.

Washington was ready to “engage immediately in negotiations” to achieve the North’s denuclearization of North Korea by January 2021, he added.

Negotiations had stalled after the historic Singapore summit between Trump and Kim in June, when Kim declared his backing for denuclearization of the peninsula but no details were agreed.