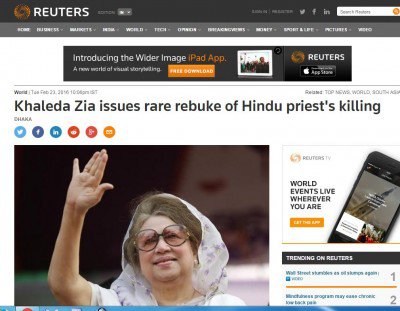 An abbot of a monastery was killed by 5-6 assailants last Sunday morning. Jogeshwar Roy had his throat slit when he was preparing for morning prayers beside the monastery situated at Debiganj of Chandigarh. Khaleda Zia, the leader of the government’s most prominent opposition party BNP, reacted to this news by saying, “I express my deepest condemnation to the attack and the murder of an abbot of the minorities. The minorities are the peace-loving citizens of this country and they have the right to live in this country.” She fears these incidents are a bad omen for the country. Her reaction was given importance by several foreign news platforms, such as Reuters, Swiss Info.ch and Golf Times. The government has been blaming Khaleda Zia and BNP for extremist attacks like this for a long time now. Although the Islami Extremist activities have been rampant, BNP has kept quiet until now. This is one of the rare times when Khaleda Zia has protested the allegations against her party and spoken against extremism.