Kerala flood: MP’s give over Rs 40 crore from MPLADS fund for flood relief 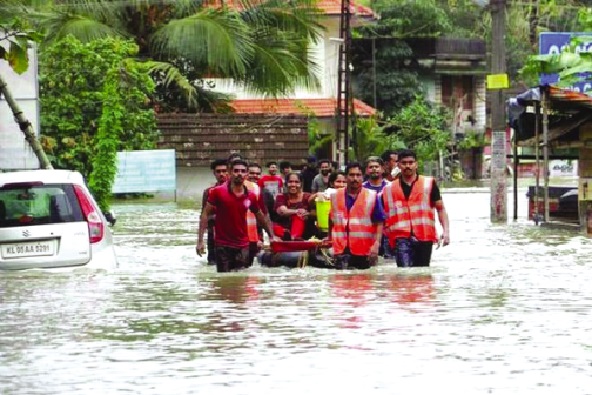 Catch News
Hundred Member of Parliaments (MPs) from across India have contributed an amount of Rs 43.66 crore from the Members of Parliament Local Area Development Scheme (MPLADS) fund for the rehabilitation works in flood-affected areas of Kerala.
The scheme has a provision for MPs to contribute funds for rehabilitation and reconstruction works in the areas affected by severe calamity.
On August 24, an appeal to all MPs was issued by the Minister of Statistics Programme Implementation, D. V. Sadananda Gowda, to contribute from their MPLADS fund for the rehabilitation work, after the Ministry of Home Affairs declared the flood situation in Kerala as severe in nature.
As per guideline of the scheme, an MP can contribute upto Rs 1 crore from MPLADS fund for rehabilitation works in affected areas.
Out of the total MPs, 56 are from the Rajya Sabha, who have contributed Rs 29.82 crore while the rest Rs 13.84 crore came from 44 Lok Sabha members.
30 MPs have contributed Rs 1 crore including AK Antony, KTS Tulsi, Amar Singh, Prem Chand Gupta, Suresh Prabhu and M J Akhbar among others, 12 MPs contributed Rs 50 lakh or more and 12 MPs contributed Rs. 25 lakh. Rest of the MPs have contributed between Rs 1 lakh to less than Rs 25 lakh.
Out of the total 100 MPs, six are from Kerala, 14 of Uttar Pradesh, 11 from Maharashtra, nine of Bihar, seven MPs of Gujarat, four each from Andhra Pradesh, Assam, Haryana, Punjab and Rajasthan, three MPs each from Delhi, Himachal Pradesh, Karnataka, Madhya Pradesh and Tamil Nadu, two MPs each from Chhattisgarh, Goa, Jharkhand, Odisha, West Bengal, and one MP each of Chandigarh, Dadar and Nagar Haveli, Daman and Diu, Jammu and Kashmir, Manipur, Mizoram and Tripura.
A separate bank account has been already opened by the Government of Kerala to receive this amount.
A month ago, Kerala was hit by the worst floods in nearly a century, which claimed lives of more than 400 people and caused damage to the tune of nearly Rs 20,000 crore.