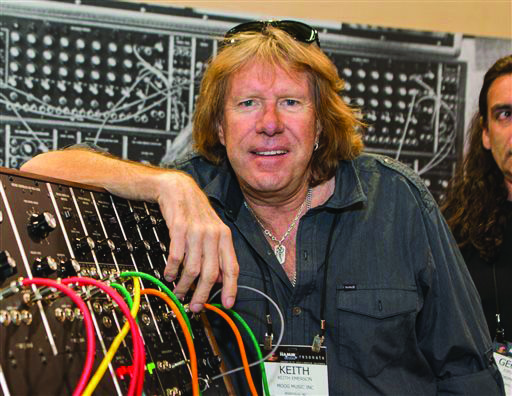 Our Time Desk
Keith Emerson, founder and keyboardist of the progressive-rock band Emerson, Lake and Palmer, has died in what may have been a suicide, it was announced Friday. He was 71.
Emerson’s longtime partner, Mari Kawaguchi, called police to his condominium in the coastal suburb of Santa Monica, California, about 1:30 a.m. He had an apparent self-inflicted gunshot wound to the head, police said. “It’s being investigated as a suicide,” Sgt. Erika Aklufi said. Kawaguchi told police that Emerson could have died anywhere between Thursday evening and Friday morning. Emerson, Palmer and vocalist/guitarist Greg Lake were giants of progressive rock in the 1970s, recording six platinum-selling albums.

He was born in Todmorden, Yorkshire in England. By his late teens, he was playing in blues and jazz clubs in London. He helped form one of the first progressive rock groups, the Nice, before hooking up with Lake and Palmer in 1970 and debuting with them at the Isle of Wight Festival, shows that also featured Jimi Hendrix and the Who. Although it filled stadiums, ELP also was ridiculed as the embodiment of the pomposity and self-indulgence that rock supposedly stood against. When the punk movement took off in the mid-’70s, the band was a special target, openly loathed by the Sex Pistols‘ Johnny Rotten among others. Years later, Rotten (then calling himself John Lydon) and Emerson became friends, Lydon told News of the World in 2007.
ELP broke up in 1979, reunited in 1991, later disbanded again and reunited one last time for a 2010 tour.Throughout, Emerson continued to compose and perform, sometimes solo and other times with various musicians, including Lake.Despite his influence, Emerson never considered himself a rock or pop icon and his true musical devotion lay elsewhere.