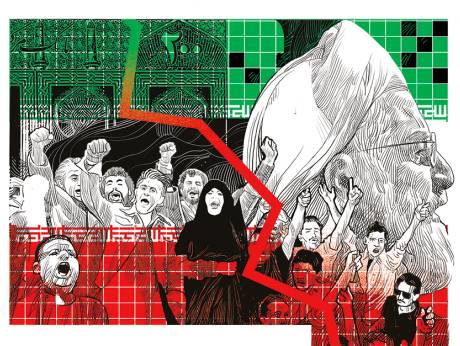 Tehran has squandered its resources and failed its own people, leading to a situation where there is not much hope for the beleaguered nation. And if it offers a forlorn future to its own people, no one should expect that it may give happiness to others

At the lobby of the largest hotel in Tehran, Espinas Palace Hotel, the receptionist apologised to me: “I’m sorry sir, but we cannot accept any of your credit cards.” That was years ago. Sensing the bewilderment on my face, he continued: “In Iran, we only pay in cash, because our country is not linked to the international credit card network.” I looked at him, sympathetically, and thought: “There’s a difference between deciding not to be linked to the network, and being forbidden to join it.” However, I opted to stay silent, seeing that the employee was embarrassed for something he had no control over. It is also wiser not to express such views when you are in Tehran.
Following Iran’s dismissal from the global financial system, the answer to these questions can be extracted from two sources. The first are credit rating reports of countries from global ratings firms — P+S, Moody’s and Fitch — based on credit capacity and financial strength. Surprisingly, Iran is not included in the list. It is actually considered the most dangerous place to invest due to the absence of legislations and laws that protect foreign capital.
The second source is a report on countries and risks, issued by the reputable Economist. It points out that the United States’ withdrawal from the nuclear agreement between Iran and the P5+1 (US, Britain, France, Russia, China plus Germany) is expected to lead to a collapse in investments and total decline in Iran’s oil exports. It will also result in difficulties in receiving financing, leading to the government not being able to pay off its foreign debts. The banking sector is the one that suffers the most due to a government deficit. Assets of Iranian banks weaken the rate of unsecured debts and the intervention of influential politicians will hinder the banks’ capabilities to give out loans. When banks are unable to provide loans, they will be unable to contribute to economic growth or adopt any commercial opportunities.
Barter option
In order to avoid using the US dollar, the deals signed between Iran and China or India might be based on a barter deal. This means that the Chinese or Indians can purchase Iranian oil and export other Chinese and Indian products that can be equivalent to the oil’s cost.
In addition, the Iranian government might resort to returning to its previous experience of relying on local industries and products due to the Iranian market’s inability to attract foreign investors. It might also depend on retaining investors who have now fled the Iranian market. The dreams of those investors have evaporated as reality dawned that the market is not worth the risk.
As for Iranian President Hassan Rouhani, the report states that his position is weakening due to his failure to bring in foreign investments or implement private projects that he had announced. He was also not able to curtail the role of the Revolutionary Guards or minimise their influence.
Another question that presents itself here is: Who will buy Iranian oil? Iran’s average production is 2.5 million barrels per day. Right after the US announced its withdrawal from the nuclear agreement, the demand for Iranian oil dropped to 600,000 barrels — the share of the European Union (EU). After all, the EU has alternatives when it comes to importing oil.
Japan and South Korea are two of the biggest importers of Iranian oil, and they have also reduced their dependence on Iran as a source. South Korea’s oil imports from Iran dropped by 40 per cent in July this year. Meanwhile, China and India import 1.3 million oil barrels per day from Iran, more than half of Iran’s daily production. Those are deals that Iran relies on for survival. The report pointed out that India is currently negotiating with the US as it considers to cut its current oil imports from Iran by 50 per cent.In response, Iran lowered its prices to attract buyers, offering a 95-cent discount for every barrel.