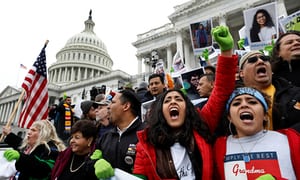 While litigation over Trump’s decision unfolds, US district judge William Alsup rules the Dreamers program must remain in place. The U.S. judge in San Francisco has blocked Donald Trump from ending an Obama-era program that shielded from deportation children brought to the United States illegally by their parents. Former president Barack Obama in 2012 welcomed 800,000 immigrants through The Deferred Action for Childhood Arrivals (Daca) program. The Trump administration decided in September to rescind the Daca program, placing the fate of hundreds of thousands of the young immigrants – known as Dreamers – in the hands of Congress. The announcement prompted  several states, organisations and individuals to file lawsuits.Nearly 22,000 Daca recipients did not successfully apply to renew their eligibility, according to a study by the Center for American Progress, a left-leaning think-tank in Washington. The researchers estimate that on average 122 Daca recipients per day will lose their legal protections in the 181 days between 5 September 2017 and 5 March. Earlier on Tuesday Trump convened a bipartisan meeting with lawmakers at the White House to discuss the fate of the Dreamers. He expressed sympathy for their plight and called on lawmakers to craft a “bill of love” that would enshrine the Daca permanently and offer the young immigrants an eventual path to US citizenship. Yet he also reiterated his demands for a border wall, a central plank of his hardline immigration platform during the 2016 presidential election and a nonstarter for Democrats. Representatives for the White House, the department of justice and the department of homeland security could not be reached immediately for comment.-Source: The Guardian