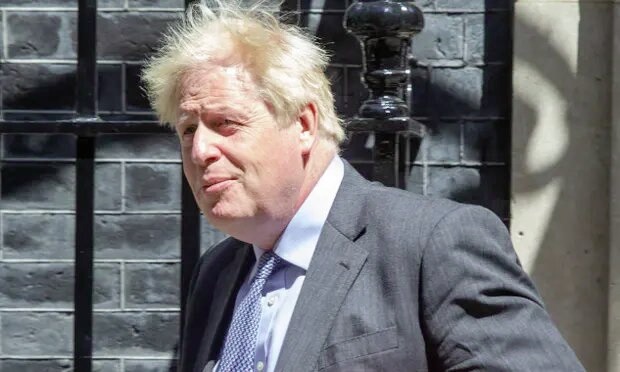 Perhaps to his own surprise, Boris Johnson finds himself part of a generation of western leaders who are compelled to grapple with much more daunting global issues than they expected a few years back as they rose towards power. Yet whereas Joe Biden, Emmanuel Macron or Olaf Scholz all give the impression, to different degrees, that they grasp the interconnected seriousness of the moment and are attempting, with varying records of success, to address it, Johnson is completely different. For him, government is overwhelmingly about getting and maintaining office. Everything else – war, inflation, climate, public health – is secondary.

It is extremely important to understand this overriding priority. It may be impossible otherwise to make sense of some of Johnson’s political choices and stances. The Rwanda deportation row this week is the latest prime example, though it is far from the only one. There is no point trying to understand the attempted deportations as a policy that might be an attempt to solve a genuine problem – global asylum seeking. They can only be understood as performative politics for the benefit of the parts of the Conservative party that hold Johnson’s future in their hands.
Rationally, the attempt to fly a small handful of unwilling refugees to Rwanda this week is not only morally and legally questionable, it is also procedurally tendentious and premature. It was always clear that the policy – of picking up asylum seekers on the Kent coast and sending them to central Africa – would be tested in the courts, and this is indeed happening. The supreme court is due to rule on the issue in July. The legal cases of the past few days, including the European court of human rights order, have all been focused on trying to stop the government from jumping the gun.

So why is the government not waiting? The answer to that question lies not in any innovative brilliance or efficacy of the policy but in Johnson’s precarious political position. A week today, voters go to the polls in the two byelections that provide the next big threat to Johnson’s position. The one in Wakefield is being seen as a test of Johnson’s capacity to hold on to working-class seats in the north and Midlands against Labour, while that in Tiverton and Honiton is a paradigm examination of the Conservatives’ grip on rural seats in the south and west against the Liberal Democrats.

Although Johnson survived last week’s no-confidence vote provoked by his Downing Street lockdown parties, he is not out of the woods yet. A double defeat on 23 June would frighten dozens of Tory MPs far more thoroughly than many admit. Even if Johnson successfully retains the leadership through the summer, with the economy on the verge of recession and the cost of living crisis likely to tighten markedly as winter nears and fuel prices rise again, further challenges are likely.
Boris Johnson says laws ‘may need to be changed’ for Rwanda plan to go ahead – video
Advertisement

The airfield scenes on Tuesday night, with the deportation flight aborted at the 11th hour, should thus be understood as deliberately performative. The wheeze was to spotlight the government’s hostility not just to asylum seekers but also to lawyers and judges. The intervention by the European court of human rights supplied a powerful and gratefully received emotional connection with the populist campaigns for sovereignty and Brexit (never mind that the ECHR is nothing formally to do with the European Union).

The target audiences in all this were the rightwing press and Tory voters in the two byelections. All that mattered was that they should have been aroused by the confrontation. If Guardian readers got angry, or Keir Starmer or Ed Davey made a fuss about it (which, perhaps significantly, neither of them did at prime minister’s questions on Wednesday), so much the better. In that context the financial cost was immaterial. If the Conservatives hold on to Tiverton and Honiton, and the threat to Johnson abates again for a while, it will be judged to have been worth every penny.
Dominic Cummings’s famous comparison of Johnson with a supermarket trolley, rolling first to one side of the political aisle and then to other, grabbing hold of whatever takes his fancy, is a stimulating one. But it implies that Johnson’s choices are entirely impulsive and random. This is not true. It underplays the reality that his recent career is marked by a certain consistency.

He always tacks more readily to the right than to the center when he is in trouble. He did this over relaxing the Covid regulations, over the Owen Paterson affair and over the Northern Ireland protocol. Now he is doing it over deportations to Rwanda and the Human Rights Act.
Next week, it will be the rail strikes. He may well do it over the green agenda before he is much older.
This instinct to tack rightwards is about something larger than any of Johnson’s ideological views. It goes back to the fundamental choice that he made in 2016 to support rather than oppose Brexit. Then and afterwards, his aim was always to position the Tory party in a place where Nigel Farage could not split it from the right. It still is so today, even if Farage himself is no longer in the frontline.

The positioning, however, is often Potemkin-like. It looks rightwing, and that is what counts in the party. To Johnson, the policy reality of government is of far less concern than being the head of it. His politics is built more around campaigning and appearance than about work and achievement. Deporting asylum seekers to Rwanda matters less than being believed ready and willing to do it. What always concerns Johnson most is not what he does but what he is.