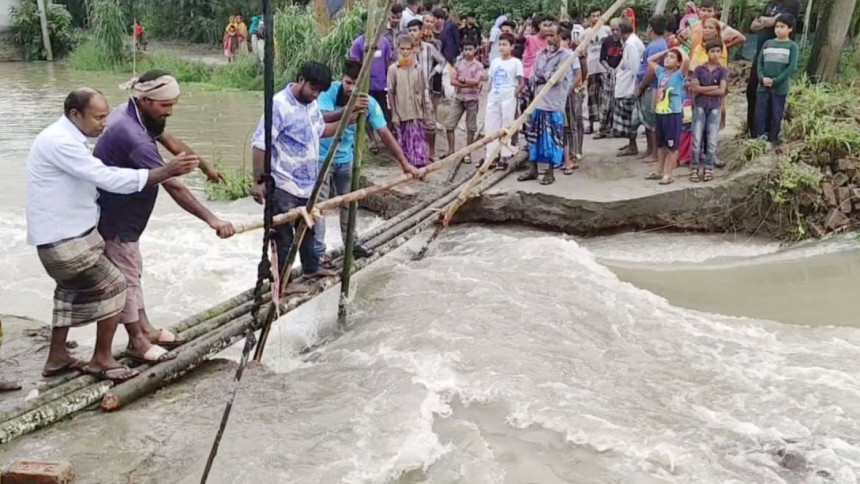 DOT Desk: Many char and low-lying areas of Tangail were inundated as Jamuna and Jhenai rivers are flowing above the danger level, reports DAily Star.
As the situation is deteriorating frequently, Water Development Board is fearing flood, reports our Tangail correspondent.

Crops, including Aush paddies, jute, sesame, peanuts and vegetables went under water in the char areas and riverside villages. Meanwhile, at least 10 villages were flooded after an embankment of WDB collapsed at Analiabari under Salla union in Kalihati upazila due to the increased water level of Jamuna river this morning.
Salla UP Chairman Abdul Alim said that the inundated villages include Analiabari, Nordohi, Bhawal, Deopur, Bilchaiya, Bhabla and Deolabari.

Locals were evacuated from their houses after cracks developed on another embankment in Mirhamjani area of Kalihati yesterday (June 18, 2022) afternoon, which was repaired by the WDB last year, he added.

On the other hand, Jhenai river water was entering the localities after a part of Dakshinpara-Balina road in Basail upazila was damaged, local sources said.

According to WDB, the water of Jamuna river increased by 30cm at Porabari point in the last 24 hours till 6am today and was flowing 2cm above the danger marks.

The Jhenai river water increased by 19cm at Jokarchar point and flowing 22cm above the danger marks.

Moreover, erosion of different rivers including Jamuna was continuing at different places including Govindasi union in Bhuanpur upazila with the increase of water levels.

Dr Ataul Gani, deputy commissioner of Tangail, said that they have all necessary preparations to tackle the flood situation.