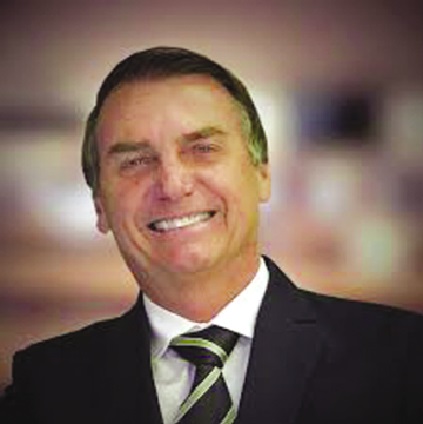 The Guardian, UK
It was 6.59am on Wednesday when Jair Bolsonaro fired off his first tweet of the day from what must rank as one of the most unusual campaign headquarters in political history. “While they insist on fallacies, labels and this fixation with the word ‘dictatorship’, more than 14 million people are unemployed, citizens are held hostage in their own homes, there are 60,000 homicides and 50,000 women are being raped each year,” declared the far-right frontrunner to become Brazil’s next president. “This is what the people care about! It’s urgent!”
Sixty-eight minutes later, at 8.07am, a second, 241-character salvo emerged from the fifth floor of one of Brazil’s most exclusive hospitals. “We want to rescue our long-lost values and get Brazil out of this swamp of violence and corruption they have put us in!” Bolsonaro told his 1.5 million Twitter followers. “Our country can’t take another four years [of this].”
They were just the latest Trumpian dispatches to emerge from São Paulo’s Israelita Albert Einstein hospital, where Bolsonaro has been staying after being stabbed on the campaign trail on 6 September.
When the rightwing populist was attacked – almost one month to the day before the 7 October vote – analysts and relatives alike predicted it would turbo-charge his bid for the leadership of Latin America’s largest country.
Fast-forward nearly three weeks and those predictions have largely come true. Bolsonaro continues to top polls with about 27% of the vote, compared with the 21% of his closest rival, Fernando Haddad from the Workers’ party (PT) of jailed former president Luiz Inácio Lula da Silva.
“As disastrous as it was for him personally … politically it was quite good for him,” said Brian Winter, a Brazil expert and the editor-in-chief of Americas Quarterly. “I don’t believe the stabbing caused his support to grow per se. I think what happened was that his loyal base of supporters hardened. Their narrative of ‘everybody is against us’ was reinforced,” Winter added.
But the assassination attempt, which left Bolsonaro on the brink of death and needing life-saving surgery, had also “inoculated” him from negative attacks at precisely the moment opponents had needed to lay siege to his campaign.
Winter said Bolsonaro’s main rightwing rival, Geraldo Alckmin, had intended to spend the last stretch of the campaign “just destroying him” in the media – “and because of the attack they couldn’t do it”.
Bolsonaro, in contrast, appears to have played his political cards wisely since the stabbing, transforming his enforced exile from on-the-ground campaigning into a reality TV-style spectacle that has guaranteed him a place on Brazil’s front pages, day after day.
Unable to take to the streets, he has made his final campaign pitches to Brazil’s 147 million voters in Twitter posts and videos, Facebook live streams and, most recently, a tearful 25-minute interview in which he urged viewers to ditch Lula’s PT and take a chance on him. “I know you are very disappointed with politics. But this is your chance,” Bolsonaro, whose hair had been especially trimmed by a hospital coiffeur, told his bedside interrogator.