It’s a Fire in the Stomach! 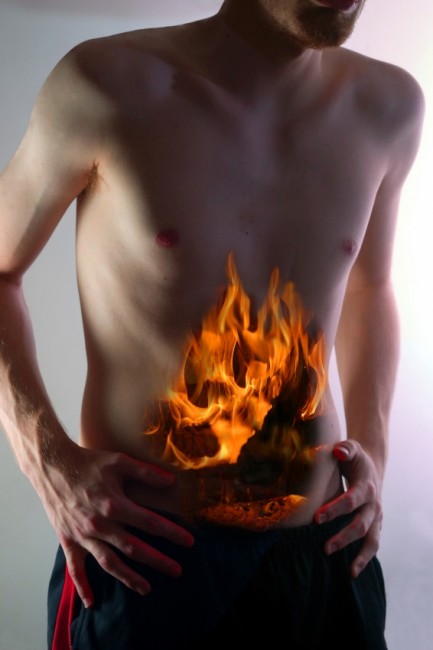 One of the widespread problems that we face, especially as Bengali people, is gastritis, commonly known as gastric ulcers. Intense mix of spices and herbs of hundred kinds in our savories has grown into a cultural norm in the Indian subcontinent, as more and more people prefer different blends of masalas to satisfy their taste buds. However mouth-watering the curries and daal may turn out, in the long run, too much spice is doing more damage to our stomach than we may realize until much later when the problem becomes much severe.
For those of who you don’t know what gastritis is, gastritis is an inflammation of the inner lining of stomach that can be caused by infections in the stomach, hot spicy foods, smoking, alcohol, particular medications, etc. It can be aggravated by staying up late at night, irregular timings of diet, and so on. But before the severe problems of gastritis arise in your stomach, a number of symptoms such as excessive gas, indigestion, acid indigestion, heartburn, distension, etc frequently precede. There are a lot of ways to describe excessive gas: burping, belching, flatulence, and bloating. While what you call it might not seem to matter, being able to identify where gas starts – and where it ends – can help you treat painful or embarrassing symptoms.
Excessive gas is a mild gastric problem, which does not cause too much discomfort but only embarrassment. If you are suffering symptoms of gastric problems, then it may be due to indigestion, which can because by eating the wrong diet and eating too much mouthful. The next stage, acid indigestion, causes discomfort and pan due to the stomach producing too much acid while digestion. Antacids and similar other medications from the common medical stores generally relieves us from this pain. After similar stages of discomfort, comes the ultimate severe stage of gastric ulcer, where the symptoms are loss of appetite, pain in the upper abdomen just under the ribs, nausea, hiccups, vomiting, blood in the vomit, blood in the bowel and weight loss. This serious case may require the person to have surgery.
Having said all the symptoms and causes of gastric problems, the remedies thankfully, are mostly prevention of certain factors and a more disciplined lifestyle, before it reaches advanced stage:

• Avoid foods known to cause gas, such as onions, garlic, pepper and other spices, whole grains, dairy products such as milk, ice cream, certain fruits like apples and pears, vegetables including broccoli, and so on. Certain combinations of food may not go along with each other and upset the stomach, depending on specific individuals
• Eat and drink slowly, taking your time. When you eat or drink fast, you can swallow a lot of air, which can cause gas
• Avoid smoking, chewing gums, drinking through a straw, etc may cause to fill up your stomach with air, leading to bloating
• Avoid artificial sweeteners. Sorbitol and related sugar alcohols used in many sugar-free versions of foods can also aggravate gas
• Drink before meals. If you drink liquids with your meals, you lose stomach acids and can’t break down food as well

Some other simple things to avoid are late nights, heavy meals before sleep, oily and hot foods, fatty foods, excessive and irregular eating, etc. Fortunately, since it just takes a few disciplined rules, why not just try them and boost up your lifestyle? After all, prevention is better than cure!
Tahsin Rahman Oshin is a feature writer at the Daily Our Time who has a passion for performing arts and fashion. She loves cats, and plans to establish an animal shelter in future. She recently completed her A levels from Mastermind School.