Israeli student killed in Australia is buried in her home town 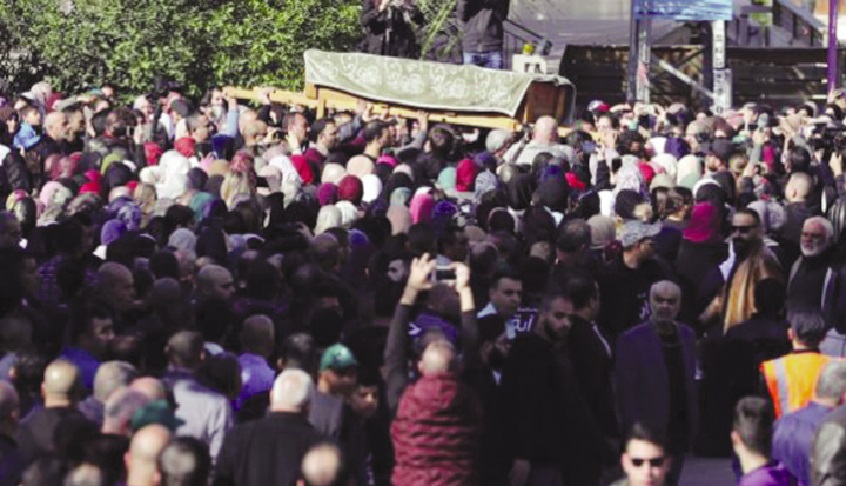 Reuters: The family and friends of an Israeli student who was killed in Australia walked in a funeral procession through the streets of her home town on yesterday. Mourners gathered to witness the body of 21-year-old Aiia Maasarwe being laid to rest in a cemetery in the Arab  town of Baqa al-Gharbiyye in northern Israel, a week after she was found dead.
The procession wound several kilometres through the narrow streets to a mosque near the central market. She was then buried in a tree-filled cemetery on the eastern edge of town, as an imam prayed over her body, saying: “May God stay with her, and raise you to heaven in peace, Aiia.”
Maasarwe’s death caused outrage in Australia, where thousands marched over the weekend calling for safety for women.
She was killed while walking home after a night out with friends in Melbourne, where she was attending La Trobe University on a six-month exchange from Shanghai University, where she was studying.
Her body was found by passers-by early on Jan. 16 near the university’s Bundoora campus.
Maasarwe’s death has shocked the close-knit community of Baqa al-Gharbiyye, which lies next to the Israeli-occupied West Bank. Its 30,000 residents are members of the Arab minority who make up around a fifth of Israel’s population.
Near the family’s front gate, neighbours had hung signs reading “Stop picking our flowers”. Another banner read: “Killing the dream and killing education is killing ambition and humanity.”
As relatives wept, girls held banners in Arabic and English saying: “Aiia, your beautiful soul will never be forgotten.”
A family member said Maasarwe had been talking on the phone to her sister in Israel when she was attacked, and that she often made such calls to feel safer while walking home at night.
It was the second time in seven months that a young woman had been killed on her way home at night in Melbourne, which has an active night life and is popular with overseas students.
After the funeral her father, Saeed, thanked Australians for their help. “There are many things the Australian people can teach,” he said. “Their humanity and the solidarity they show people when they have problems. I appreciate their support.”
A 20-year-old man who has been charged with murder was remanded in custody in Melbourne on Monday. His case has been adjourned until June.