Islam has no room for militancy: PM 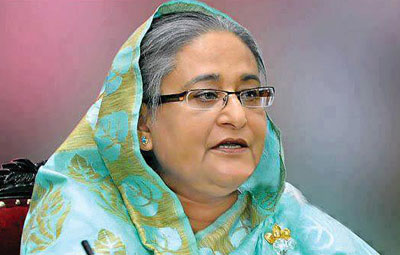 UNB, Dhaka
Prime Minister Sheikh Hasina on Tuesday sought cooperation from the country’s Islamic scholars in spreading out a message among people that there is no place for militancy and terrorism in Islam as it is a religion of peace.
“I seek your cooperation in establishing the belief among people that there’s no place of militancy and terrorism in Islam…this is a religion of peace…please publicise this message,” she said. Prime Minister said this while addressing the National Khatib Conference at Bangabandhu International Conference Centre. Islamic Foundation organised the programme with Religious Affairs Minister Principal Motior Rahman in the chair.
Sheikh Hasina reminded all, including religious leaders, not to make any remark which may hurt the religious sentiment of others saying religion is for individuals and every one will perform rituals according to their own faiths. The Prime Minister urged the Islamic scholars and the people of the country to take steps against those engaged in subversive and terrorist acts in the name of Islam. “Please stay alert and keep them away from such activities.” Hasina bemoaned that it hurts her too much when she sees some countries often mix militancy with Islam. “For a handful of people, we’ve to endue this immense pain…this is really very painful for us,” she added. Recalling the horrible days of burning the copies of Holy Quran in Baitul Mukarram Masjid area by BNP-Jamaat and Hefajat activists, Hasina also sought cooperation from the Alem, Ulema and Mashayekh so that no one can again commit such evil activities in the future. She also mentioned that often a vested quarter wants to create instability in the country.
“But it’s the duty of the government to provide safety and peace to the people of the country along with ensuring food, shelter, medicare facilities and education so that their lifestyle can be improved…we’re working towards that direction.
” Referring to her joining of a number of international fora, Hasina said she herself took a strong stance against generalising of Muslims as terrorists. The Prime Minister said it was only she who boldly condemned and protested the Israeli indiscriminate killing of Palestinian children and women.