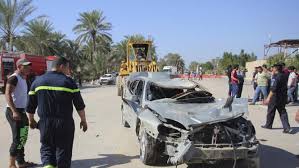 A police officer said Monday that among the dead were 52 civilians, while the rest were members of the security forces. Another 95 people were injured in the attack that targeted a security checkpoint at one of the entrances to the city of Hillah, located about 95 kilometers (60 miles) south of Baghdad.

The officer said that eight other people were still missing.

A medical officials confirmed casualty figures. Both officials spoke on condition of anonymity as they were not authorized to release information.

The Islamic State group claimed responsibility for the suicide bombing in an online statement.