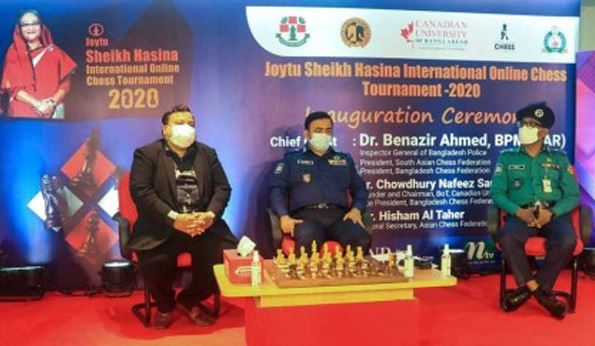 Rumi Akter Polly of DOT
[2] Prime Minister Sheikh Hasina’s 74th birthday is on September 28. “Jayatu Sheikh Hasina International Online Chess Competition” has started in Dhaka ahead of her birthday, reports bd-protidin.com.
[3] The tournament was inaugurated yesterday noon at the Canadian University of Bangladesh campus on Bir Uttam Rafiqul Islam Avenue in the capital, reports dhakatimes24.com.
[4] The competition was inaugurated by the chief guest Inspector General of Police (IGP) Benazir Ahmed, President of Bangladesh Chess Federation and South Asia Chess Council.
[5] Speaking as the chief guest on the occasion, IGP Benazir Ahmed said that such competitions would be organized more in Bangladesh and South Asia.
[6] “We are trying to get a place where there will be a sports hall,” he said.

Anyone can come and play chess at any time. The IGP also promised to organize regular training in chess and appoint a full-time coach.

Three grandmasters of Bangladesh Ziaur Rahman, Enamul Hossain Rajib and Rifat bin Sattar are participating in the tournament. There are also five Grandmasters from India, two from Indonesia and two from the Philippines. Grandmasters from Iran, Russia, Singapore and Vietnam are also taking part in the competition. The whole event is being organized online. The competition will continue till September 26.

The prize money for this nine-round tournament in the Swiss league system is six thousand dollars. The award ceremony will be held on September 27 at Hotel Le Meridian in the capital. State Minister for Youth and Sports Zahid Ahsan Russell will be the chief guest.