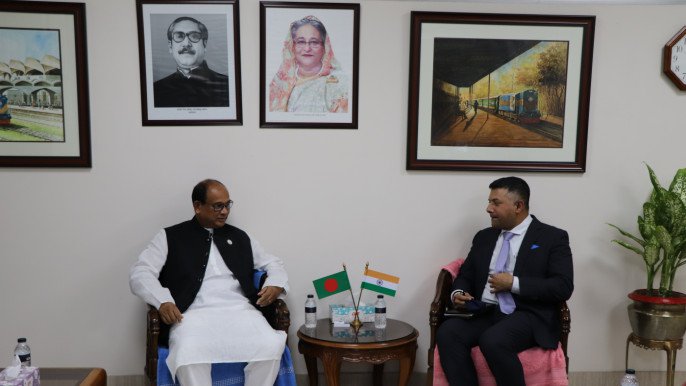 DOT Desk: Indian High Commissioner to Bangladesh Vikram Kumar Doraiswami has proposed to run a fourth inter-country train between Dhaka and Kolkata, reports TBS.
During a courtesy call with Railways Minister Nurul Islam Sujan Monday (18 July), Doraiswami discussed ongoing projects in Bangladesh with Indian funding and the projects that are to be undertaken in future, said a press release.
“Currently Maitree, Bandhan and Mitali Express trains are running between Bangladesh and India. Considering the passenger demand, one more train can be run on the Dhaka-Kolkata route via Darshana,” said the Indian High Commissioner. Minister Nurul Islam Sujan expressed his interest in importing high quality tourist coaches from India to run from Dhaka to Cox’s Bazar.
He also mentioned purchasing these coaches as well as engines and baggage vans under line of credit (LC).
The Railways Minister also emphasised enhancing connectivity with Nepal and Bhutan.
Discussing the construction of a new railway line from Panchagarh to Banglabandha, Sujan highlighted that the connection point with India has not been decided yet.
He urged India to expedite the matter.