ICC WORLD T20 2016 Expecting A Comeback From The Tigers 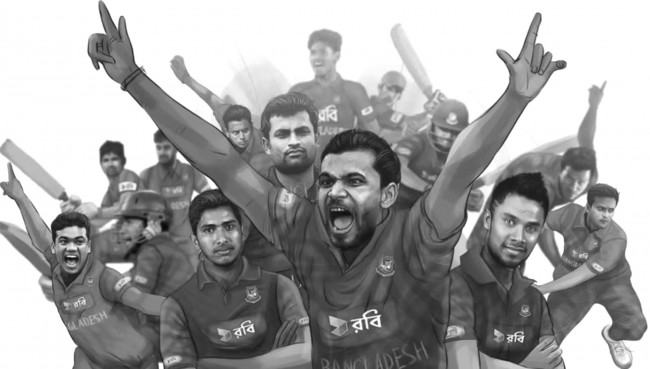 It was not a miracle. Last year in the ICC Cricket World Cup 2015, Bangladesh kicked off the tournament with a shaky start losing to Sri-Lanka and won against the non-playing nation Scotland chasing a 300+ target. And the rest was history. The voice of Nasser Hussain yelled out after that delivery of Rubel Hossain to Jimmy Anderson – “Bowled him, full and straight. The Bangla Tigers have knocked the England Tigers out of the World Cup.” This voice still shivers out our spine, a very much proud moment for the whole country. In the recent edition of Asia Cup of 2016, Bangladesh lost their first game against India by a deliberate margin. They did not lose hopes. By the dint of the brilliant captaincy of the legend Mashrafe Bin Mortaza, our team fought back brilliantly and achieved the final spots.
Just after a year, the Bangla Tigers are again facing the limited format of World Cup Cricket. This time their first lose was against their rival Pakistan and they were defeated by a huge margin. Mashrafe Bin Mortaza is not really worried about their defeat and they are sure that they will fight back in the very next match in their encounter against the hosts. Perhaps he believed that things would have been different if Tamim exercised better judgment when Sharjeel Khan ill-timed a knock in the first over. He didn’t do a volte face in time and the opportunity to heap strain on an uncertain team was lost. Sharjeel hit two robust sixes during 18 out of 10, before falling to Arafat Sunny, but the detonation had set the nature. During batting Tamim took charge, lofting Malik down the wicket for six. But he couldn’t provide much impulsion, and holed out off Afridi. It left the middle order with the too much dependability. They didn’t have much time settle down either. Mahmudullah holed out attempting a sumptuous flounce off Imad Wasim, and though Mushfiqur Rahim and Shakib put on 39, they never came close to identical the needed run-rate.
We believe that our captain will lead us towards a tremendous comeback and again this time they will knock out 4 superpowers out of the world cup and reach the semis. Win or lose, The Bangladeshi people will always support the tigers whole heartedly, even in their times of immense pressure and off forms.