I do not “agree” with this “culture”

It was started when a teacher, in 1999 of govt. school, sparked a debate over British rule while taking his class, not exactly British rule but the condition of the farmers under their regime or after enacting our own independent constitution in 1950. More than half of class had a firm belief over well being of farmers, knowing they were doing more than enough in India after Gandhi than making accumulation under the residency of viceroy, supporting India’s freedom class argued that much have changed after bidding a farewell to British and farmers too have become more healthier and prosperous than they had ever been. They also hinted towards green revolution happened in 1966-67 and lasted next 2 decades, Making India reliable on her own food grains by introducing HYV seeds which earlier made India so sufficient that she can expert even to the rest of world but proven to be hazardous later.
Meanwhile, farmers got benefitted and emerged as victorious with prosperity by using modern technique of production on their farms. Those, more than half, sitting on benches in 1999, clued about the reforming condition of agriculture from conventional method to modern era, from bull cart and rain water to tractor and tubell. Well, without putting a doubt one can say, they had stated their facts tremendously but there were more facts to be revealed but that less than half of class of the batch 1999, had no strong evidences to contradict their counterparts (majority students). However, they gave themselves a try, adorned their horses to run on the battle field, fought with courage and lost like warriors. 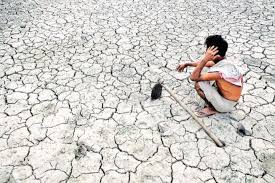 I wish things were as true as were stated that day, I wish farmers of this Earth would have really been wealthy one, But truth was different and it took 16 years more to devastating me inside, it came like a draught, like a heavy rainfall and left me as bare as a farmer remains while seeing his dying golden cropping. More than 100,000 farmers have taken their lives since 1997 and 86.5 percent of farmers who took their own lives were financially indebted.
Now, it’s a time to peep into history of India’s agriculture and to tell you that 66 percent of rural laborers in India are dependent on agricultural activity for their income. Exacerbated by two years of drought in 1965 and 1966, the Indian government turned to high yielding, genetically modified, “miracle-seeds” provided by the World Bank and The United States. These seeds, coupled with the Indian government’s assistance and price incentives, sparked the Green Revolution in India. Although these farming methods worked for several years for many farmers, they began to show adverse effects in the late 1980s.
The overuse of chemical fertilizers caused the soil to become infertile. This, coupled with a reduction in the genetic variety of crops, and three years of drought led to zero yield. Without crops to sell farmers were unable to pay their debts. Their average debt was about $835. On average, there has been one farmer’s suicide every 32 minutes since 2002.
There has been minimal financial support from the government for small farmers. Many small farmers don’t qualify for bank credit, forcing farmers to turn to moneylenders, who charge up to 20% interest on a four-month loan. As collateral, farmers often sign away the title to their land. A crop failure, an unexpected health expense or the marriage of a daughter are perilous to the livelihood of these farmers suicide has spread like an epidemic among the distraught farmers. Many farmers have committed suicide by drinking the very pesticides that no longer work on their crops.
A total of 2, 96,438 farmers have committed suicide in India since 1995. According to National Crime Records Bureau (2004) data, in 2004, there were 1,963 and 4,147 suicides among farmers, and 11,937 and 14,729 suicides in total in Karnataka and Maharashtra, respectively, which implies a share of farmer suicides in total suicides of 16.4 and 28.2 percent, respectively.
since January 1, this year, every week 20-30 suicides have been reported in eight districts of Marathwada. n the second week of this month, as many as 35 suicides were registered which, officials said, were the highest for the year, flying in the face of the government’s promise to reduce the suicide rate.
Being a loser was hurting that day as I was a part of that less than half of class of that batch of 1999 but I, the looser one, want to lose again in 2016, as now I am a part of those heartbroken farmers who are more than half of India’s population.