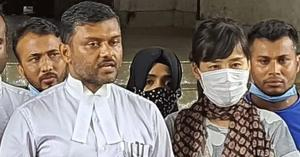 [3] Shishir Monir said, Imran Sharif has demanded compensation of Tk 5 crore for publishing defamatory information, otherwise he has threatened to file a case. Now, according to the court order, the Erico Nakano-Imran Sharif couple got up in a rented house at Gulshan-1 with their two children for 15 days. The court will give instructions to them on September 18.

[4] Erico and Imran were married in 2006 in Tokyo, Japan. Erico is a doctor by profession, Imran is an electrical engineer.

They have three children. Erico filed for divorce earlier this year.

Meanwhile, Imran moved to Dhaka with his two infant daughters.[5] A Japanese court then ordered Erico to release the children.

Erico has taken refuge in the court to get the children back.

Imran has also applied to the family court of Bangladesh for custody of the children.