How to live better and stop destroying the planet 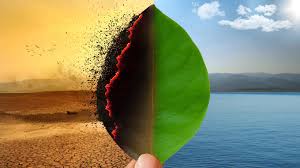 A recent United Nations-backed report highlighted the scale of destruction humans are inflicting on the natural world. To reverse these trends, humanity must transform its economic models and food system, treat the world’s oceans far better, and think carefully about the best ways to tackle climate change.
Earlier this month, a bleak global assessment of the shocking state of life on Earth made headlines worldwide. According to the report by the Intergovernmental Science-Policy Platform on Biodiversity and Ecosystem Services (IPBES), about 12% of all known animal and plant species are now threatened with extinction. Worse still, humanity is destroying entire habitats, and with them the web of life that supports societies and economies. Unsurprisingly, the findings were greeted with despair.
As IPBES scientific contributors and co-authors of the report, we face this news every day. It is impossible not to react emotionally to the scale of destruction humans are inflicting on the natural world. Yet the report also goes to great lengths – although this has been less widely reported – to identify ways to reverse this alarming trend. To succeed, however, humans need to undertake four major transformations.
First, we must substantially change our legal, economic, and technological systems. It is true, as the report emphasizes, that protected areas and legislation have prevented the extinction of many species, such as the panda. And further conservation steps are clearly needed. But humans need to make far more fundamental changes.
The IPBES report therefore explores numerous possible economic development paths for the world to 2050, and identifies ways to protect nature while increasing human prosperity. The measures it proposes are not the usual suspects, such as reducing deforestation or curtailing the exploitation of species; instead, they address the causes of these problems.Here, the report concludes that sustaining Earth’s living systems requires us to redefine what a good quality of life means. Societies need to get away from the idea that a good and meaningful life is possible only through ever-increasing material consumption. This is clearly absurd. Wellbeing has been stagnating in many developed countries, even as consumption continues to increase.Solutions could instead build upon new social and political narratives showing that happiness goes hand in hand with lowering total consumption and cutting waste. Reducing gender and wealth inequalities also improves a society’s wellbeing, as Nordic countries have shown. And, as IPBES recognizes, indigenous and local knowledge can reveal other ways of managing ecosystems sustainably.Undertaking such shifts will not be easy. The world must urgently adopt a new economic paradigm that goes beyond a singular focus on GDP. Second, the world must transform its food system. The way we currently produce and consume food is a major cause of ecological destruction. Third, we must treat the world’s oceans far better. Industrial fishing now extends to 55% of the world’s ocean area, and just 3% is free from human pressure.
Finally, the world must think carefully about the best ways to tackle climate change. The timber and agriculture industries – in particular the production of soy, palm oil, and beef – are causing rapid deforestation, with devastating consequences for the stability of the Amazon rainforest, the world’s climate, and many species. One of the IPBES report’s development paths to 2050 is in line with the findings of the separate EAT-Lancet Commission report on sustainable food systems. That report, released earlier this year, concluded that the world could feed ten billion people a healthy diet – with less meat and dairy products, and more nuts and vegetables – without needing to use more land.
Protecting the living world calls for systemic changes that go beyond narrowly focused policies on biodiversity or climate.Fighting poverty and inequality are essential parts of the solution, too. But these transformative steps will happen only if we start treating the situation like the crisis it is, as Swedish climate activist and student Greta Thunberg has urged.
In recent weeks, both the UK and Irish parliaments have declared climate and nature emergencies, and we urge other countries to do the same. In 2020, a “superyear” for international environmental policy – with major summits on biodiversity, climate, and the oceans – the UN should mark its 75th anniversary by declaring an emergency for the planet to accelerate action to ensure long-term sustainability.