How the world’s largest inflatable aircraft hangar was built 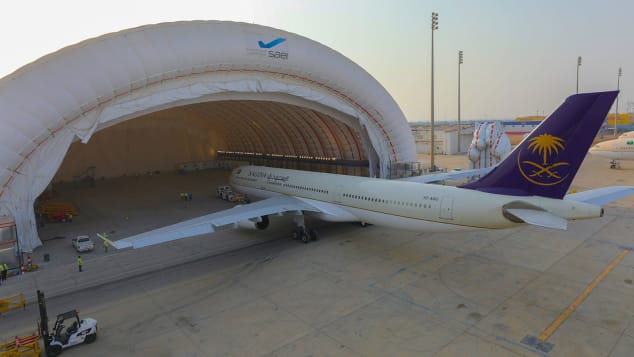 It is here in Saudi Arabia, opposite the main terminal of Jeddah’s King Abdulaziz International Airport, that a large white, ribbed structure rises from the ground up to a height that makes even the jumbo jets parked nearby appear small.
This is the largest inflatable hangar in the world, constructed in 2019 by Buildair, a Barcelona-based firm that has built similar facilities of different sizes at several other airports in Europe, Asia and the Middle East. Buildair is one of a small group of firms, including Ireland’s J.B. Roche from Ireland, the UAE’s Aviatech and Russia’s Aviastroy, which are able to deploy inflatable structures upon demand. Of these, Buildair has found a particular niche in the market for very large inflatable structures.
A case in point is the hangar in Jeddah, which is used by a Saudi aerospace services firm to provide maintenance to commercial aircraft. With its 81 meters of clear length (that’s usable space excluding the walls), 75 meters of width and 25.5 meters of height, this facility is capable of sheltering airliners up to the size of a Boeing 787 or an Airbus A330. That record could also be surpassed soon, since the firm has designed an even larger inflatable hanger capable of housing the largest passenger jet of all. “We are talking with a major A380 operator that is interested in this technology,” Jordi Pirretas, Buildair’s founder and managing director, tells CNN Travel.
The hangar’s ribbed appearance, reminiscent of Michelin’s famous “Bibendum” tire guy mascot, is due to the structure being made of inflatable fiber tubes covered in a PVC layer.
Air is blown from both ends of the tubes in order to inflate them and keep air pressure at the desired level on a continuous basis. If you’ve ever used an inflatable mattress, you may have noticed that air pressure usually drops a little over time due to air slowly trickling out. And then there’s the fact that air volume also changes with temperature.
To prevent this, Buildair has developed a proprietary technology, called AIRTIGHT, to seal the structure and hold it in place without having to continuously pump air into the tubes. Pressure inside the tubes is also monitored at all times by an automatic control system.
A beneficial property of these inflatable hangars is that, unlike bricks and mortar, they let radio frequencies through. This allows them to be considered as if they were “transparent,” which means there aren’t as many constraints when it comes to their location within an airfield’s grounds.