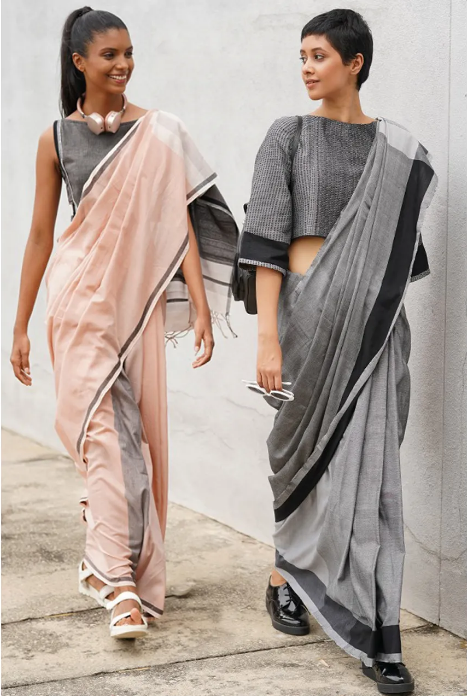 The sari, a traditionally modest and ‘feminine’ garment, is being re-interpreted and re-energised by a new wave of fashion fans. Zinara Rathnayake meets some of them, and finds out why.
One of the oldest forms of clothing, the sari, has been integral to the lives of many south Asians for centuries. The garment has long been seen as the embodiment of traditional, conventional and ‘feminine’ beauty. But recently, younger people are subverting this stereotype, reclaiming the sari in a more contemporary way.
The word sari (or saree) comes from the Sanskrit word sati, which means a strip of cloth. It has a varying length of four to nine yards (3.6m – 8.2m); most saris are six yards (5.5m) long. The history of the garment goes back to the Indus Valley civilisation of around 3200 BC to 2000 BC, where people wore a long piece of fabric. The garment has evolved over time, especially during the 19th and early 20th centuries, when the country was under British colonial rule. While there are many different ways to drape saris, in their book, The Sari by Mukulika Banerjee and Daniel Miller, the authors look at the history of the nivi style, the most popular sari style today. While women at home wore saris without a blouse or slip, Jnanadanandini Devi, a Bengali social reformer during the British colonial time, thought it would be unsuitable in public. Looking for something modest, she took inspiration from her Parsi hosts in Mumbai in 1864, who wore the sari with a petticoat or slip and a blouse. This gave birth to the nivi style; one end of the sari tucked into the top of the slip, wrapped and pleated around the waist, and the flowing, embellished end (named pallu) thrown over the left shoulder. In the early years of the 20th Century, this nivi style of the sari appeared in images of women in India’s nationalist movement, which helped develop it a mass appeal.
In Ancient Textile Series, a book series about craft and fabric, author Aarti Kawlra writes in her essay, Sari and the Narrative of Nation in 20th-Century India, that during these nationalist movements, the sari emerged as a symbol of “Indianness”, the emblem of south Asian culture and feminine beauty. “So central was the sari to the nationalist narrative that, from the early part of the 20th Century, it was employed to create the persona of a ‘proper’ Indian woman within the frame of increasingly gendered societal norms,” writes Kawlra.
From there, the sari became the dress of “cultured” south Asian women. The idea that a sari-wearing woman is more modest, delicate and respectful became widespread. Speaking to BBC Culture, Mukulika Banerjee, social anthropologist and co-author of The Sari says that there is certainly a correlation between wearing a sari and “feminine” beauty. Women would transition to wearing a sari after their marriage, and the garment was a symbol of their femininity. “A sari is seen to be transformative in self-presentation in a way that a suit is for a man,” she says.
For many married women, the sari became essential attire rather than a fashion choice. They had a sari to wear at home, there was a sari for market and temple, and more lavish saris for occasions like weddings. Over the years, however, many married women have adapted tunic tops and skirts for easier movement. Banerjee says that the idea of the sari as “restricting movement” is debunked by the millions of working women who are construction workers and farmers. “For them, it’s the most economical option,” says Banerjee.