How can Jacob Rees-Mogg find ‘Brexit opportunities’? They don’t exist 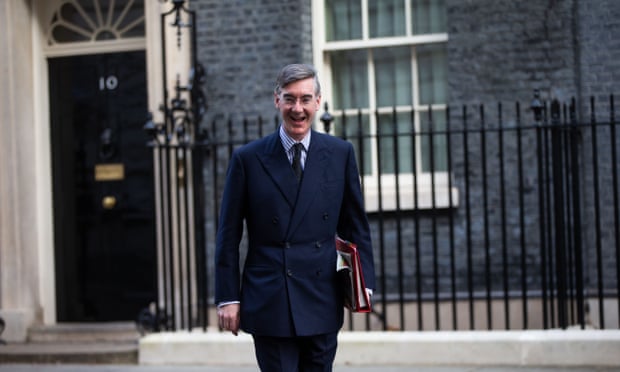 Jacob Rees-Mogg reminds me of a kipper. A very specific kipper, resting on a plastic pillow of ice, which intruded into the public consciousness back in 2019, when Boris Johnson held it aloft, proclaiming it as an example of the absurd, pettifogging rules imposed by Brussels on the yeoman traders of Britain. Naturally, Johnson’s claims fell apart on inspection. There was no European directive mandating a cushion of ice for the sleeping fish. On the contrary, the ice pillow was demanded by a British rule, drawn up by British officials. Nothing to do with the EU.
The episode came back to me when Rees-Mogg, newly appointed minister for Brexit opportunities and government efficiency, appealed to readers of the Sun to write in and tell him “of ANY petty old EU regulation that should be abolished”. That’s because Johnson’s kipper illustrated not only his serial dishonesty on matters European – already well-documented – but also a gap in the Brexiters’ arsenal. That gap was fairly well concealed in the 2016 referendum campaign, but Rees-Mogg’s plea in the Sun, like Johnson’s kipper, has exposed it.
Here’s how it can be identified. Take the Brexiters at their word – that leaving was about more than ending European immigration – and ask them to name some other reform that Britain badly needed but which proved unachievable so long as we remained in the EU: a specific change that only Brexit could unlock. The committed leaver will struggle and sputter, before either mentioning blue passports or else retreating into abstract nouns: “freedom” or “sovereignty”. Press them for a concrete, real-world benefit of Brexit, one that survives scrutiny, and they wilt. They either end up making something up, as Johnson did, or else phoning a friend – like Rees-Mogg’s call-out to Sun readers. Perhaps we’re being unfair. After all, Johnson is always telling us that Britain’s swift authorisation of Covid vaccines was possible only because we were outside the EU. Except that, too, is false. The vaccine decisions were taken during the transition period, when the UK was still bound by EU rules. There was no need to leave to make that happen.
Surely there must be something. Or is “Brexit opportunities” an oxymoron, on a par with “Ebola upsides”? The trade expert Sam Lowe gamely offers that, “Consumers could benefit from the UK embracing a position as a regulatory freeloader in the medical devices space: but this is not without its risks.” Wonder why they never put that on the side of a bus.
If the worst we could say of Brexit was that it hasn’t delivered any of its promised gains, maybe we could let it pass. But Brexit is inflicting grave losses, starting with deep economic pain, even if that pain has been well camouflaged by Covid and by the omertà imposed by a Labour leadership that would rather talk about almost anything else.
The evidence of the hurt is in abundant supply. On Wednesday, the public accounts committee reported on the “clear increase in costs, paperwork and border delays” that Brexit has imposed on UK businesses. The next day it was the turn of the Office for National Statistics, whose business survey found that more than half of the UK’s importers and exporters now cite additional paperwork and higher transportation costs as problems, with those two issues their biggest headaches by a wide margin. The phone-in programmes hum with British entrepreneurs, plenty of them leave voters, now driven to despair, forced to spend precious, exhausting hours filling in forms they never used to have to fill in and paying costs they never used to have to pay.

Ignore the talk of the greatest growth since the second world war: that’s just a function of the economy having collapsed so badly in 2020. Note instead the Bank of England’s forecast of 1.25% growth in 2023, falling to just 1% in 2024. David Smith, economics editor of the Sunday Times and no remoaner fanatic, puts that down partly to Covid but partly to the “adverse fiscal consequences of leaving the EU”, which left the country “with a budget hole that has had to be filled with higher taxes. We now have a high-tax economy strangled by red tape and hampered by trade restrictions.”