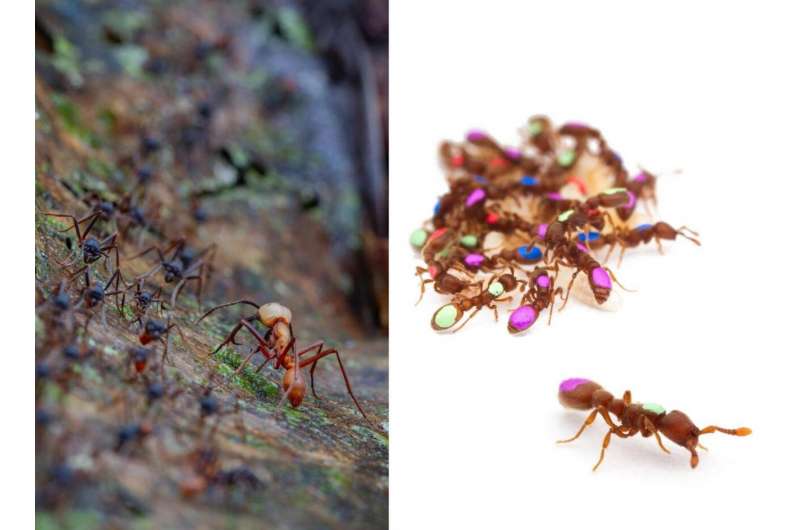 Phys.org: Army ants form some of the largest insect societies on the planet. They are quite famous in popular culture, most notably from a terrifying scene in Indiana Jones. But they are also ecologically important. They live in very large colonies and consume large amounts of arthropods. And because they eat so much of the other animals around them, they are nomadic and must keep moving in order to not run out of food. Due to their nomadic nature and mass consumption of food, they have a huge impact on arthropod populations throughout tropical rainforests floors.
Their mass raids are considered the pinnacle of collective foraging behavior in the animal kingdom. The raids are a coordinated hunting swarm of thousands and, in some species, millions of ants. The ants spontaneously stream out of their nest, moving across the forest floor in columns to hunt for food. The raids are one of the most iconic collective behaviors in the animal kingdom. Scientists have studied their ecology and observed their complex behavior extensively. And while we know how these raids happen, we know nothing of how they evolved.
A new study in Proceedings of the National Academy of Sciences led by Vikram Chandra, postdoctoral researcher, Harvard University, Asaf Gal, postdoctoral fellow, The Rockefeller University, and Daniel J.C. Kronauer, Stanley S. and Sydney R. Shuman Associate Professor, The Rockefeller University, combines phylogenetic reconstructions and computational behavioral analysis to show that army ant mass raiding evolved from a different form of coordinated hunting called group raiding through the scaling effects of increasing colony size.
The researchers discovered that the ancestral state to army ants’ mass raids is the rather different-looking group raids that their non-army ant relatives perform. The evolution of mass raids from group raids happened tens of millions of years ago and the transition from group raids to mass raids is perfectly correlated with a massive increase in colony size.
“All of these ants are within the subfamily Dorylinae,” said Chandra. “The first doryline ants, which were not army ants, lived in small colonies of a few hundred workers. When army ants evolved their foraging behavior from group to mass raiding, they also massively expanded their colony sizes. Army ant colonies now have tens of thousands—and often millions—of ants.”
Kronauer’s Laboratory of Social Evolution and Behavior at The Rockefeller University studies the clonal raider ant Ooceraea biroi, a relative of army ants. Clonal raider ants are almost the only ant species that can be kept in a lab and experimented on indefinitely. They are also genetically tractable in that researchers can make mutants or transgenic lines to compare. But they are also poorly understood, understudied, and hard to find in the field.
The mass raiding of army ants is well studied and described; however group raiding is not. And understanding group raiding is key to understanding the evolutionary trajectory to mass raiding.

“My goal has always been to study how social behavior evolves and is controlled, and how army ants have evolved,” said Kronauer. “A few years ago we discovered that the way clonal raider ants forage is through raids that are similar to army ant raids.”

To understand how the raids are structured and organized, the team collected a large number of video recordings of many colonies raiding under controlled conditions.

“Our goal was to understand what are the underlying behavioral rules the ants follow and how a raid emerges out of the behavior of individual ants,” said Gal. “Tracking individuals in a dense colony is a challenge and does not have a generally applicable solution. This is especially true for small ants that like to form dense clusters such as raider ants.”

The researchers overcame this challenge by using a custom computer vision software developed in the lab named anTraX that tracked and identified the ants based on small color marks painted on their abdomen and thorax. The method allowed them to collect accurate trajectories for all the ants for several weeks with minimal human effort, and without requiring expensive high-resolution cameras.

In a small nest of 25 ants they used 5 sets of colors and painted each ant with a unique set of colors. The researchers placed a single fire ant pupa (the prey) in the foraging arena outside of the nest. The nest sends out a scout to look for food. Once the scout finds the food, she lays a pheromone trail back to home. Inside the nest she releases, what researchers believe to be, a recruitment pheromone that attracts the ants to her. They spill out of the nest and follow her trail to the food in a group raid.