How a UNO transforms a Sunamganj upazila into a tourist destination 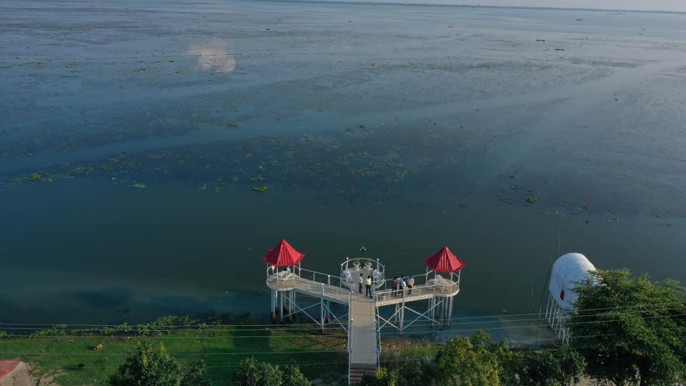 DOT Desk:How a UNO transforms a Sunamganj upazila into a tourist destination
In the last two years, several beautiful sculptures and other structures have been built in the upazila to attract tourists
Bishwamvarpur upazila in Sunamganj, surrounded by haors and hills, emerges as a striking tourist destination with a refreshed outlook, thanks to the initiatives taken by UNO Md Sadi Ur Rahin Zadid,reports TBS.
Bishwamvarpur upazila in Sunamganj, surrounded by haors and hills, emerges as a striking tourist destination with a refreshed outlook, thanks to the initiatives taken by UNO Md Sadi Ur Rahin Zadid.
Despite being the nearest upazila from Sunamganj sadar with only a distance of 12 km, Bishwamvarpur was neglected in terms of development and tourist attraction for years. Surrounded by haors and hills, the natural settings of the upazila had everything to satisfy tourists except the good will of the local authorities.
However, the fate of the upazila has been changed recently thanks to the initiatives taken by the upazila nirbahi officer (UNO) Md Sadi Ur Rahin Zadid. In the last two years, many beautiful sculptures and other structures including food courts, restrooms, entertainment centres have been built in different areas of the upazila under his supervision to attract toursts.
Local people said that now, the upazila has become one of the most beautiful tourist destinations in the district attracting people from all over the country with these structures portraying the history and tradition of Sunamganj.Jahangir Alam, general secretary of Udichi Shilpi Goshthi, Sunamganj, said, “Local heritages including the haor, fishes, agriculture have been featured in these sculptures and structures.” “Bishwamvarpur was the most neglected upazila of Sunamganj. People from other districts know Tahirpur for Tanguar Haor and Chhatak for its industries. But Bishwamvarpur had nothing. People now know this upazila because of the construction of these structures. Many tourists visit here nowadays.” The cultural activist gave all the credits to the UNO for the transformation of the upazila who joined here in 2020.Local MP (member of parliament) Pir Fazlur Rahman Misbah also praised the UNO for his enthusiasm.
“The UNO here is very active. He took the initiative to build these beautiful structures after discussing with us. He has completely transformed the upazila,” he said. “UNO Zadid reclaimed many areas from illegal occupiers and constructed these beautiful structures there. Some of the places were used as dumping grounds. But now they are portraying local heritages,” the MP added.One of the most beautiful of these structures is the Boal Square in the Currenter Bazar area of the upazila. It shows two boal fishes jumping over the water touching each other.
Another sculpture depicting a farmer standing with a stick in his hand wearing a lungi has been built in the Chalban intersection of the upazila. It is a tribute to the farmers who produce food all through the year with their relentless hard work.
Several more sculptures have been built in other parts of Bishwamvarpur. Currently, the upazila authorities are building a sculpture commemorating the freedom fighters of the country in the Chhilakandi Bazar area.Niloy, a student from the Shahjalal University, who came to visit the area from Sylhet, said, “I have been astonished to see these sculptures here. There are no such beautiful sculptures like them in Sylhet city.” According to sources, in the last two years, the UNO office has been involved in constructing Jaibangla Chattar modeled after Bangabandhu’s index finger at the Upazila Parishad intersection, Boal Chattar with fish sculpture in Currenter Bazar, Haorbritta Chattar in Palash Bazar and Krishan Chattar in Chalban Bazar.
Besides, two structures called Haor Bilas and Pahar Bilas have also been constructed next to the upazila parishad building and at the foot of the Meghalaya hills with a facility to climb the watchtower and see the mountains. The authorities have built food courts and restrooms in these areas for tourists.Md Sadi Ur Rahman Zadid, UNO of Bishwamvarpur, told The Business Standard, “Earlier, there was a lot of mismanagement throughout the upazila. The markets were full of dirt and garbage. Many government lands were occupied for parking and shops.”
“After joining here, I started working to bring them under a system. First, we evicted the illegal occupiers. Then we planned to build the sculptures and entertainment centres. Now, many people come to the upazila to see the structures.” He said that local members of parliament, the divisional commissioner and deputy commissioner have helped a lot including providing financial assistance to construct these structures.
“Besides, I have used money from various funds of upazila parishad for these constructions. Around Tk60 lakh to Tk70 lakh has been spent on this project.””The people of the area are also appreciating these works. We have not found any obstacle in constructing the sculptures. Now people want such structures in other areas too.”
The UNO, who joined the administration cadre after graduating from Shahjalal University, informed that artist Jalal Sarkar has constructed the Boal sculpture, Naim Dipu has designed Joy Bangla and Krishan chattars, and the Haor Britto has been designed by Jishnu Kumar Das.