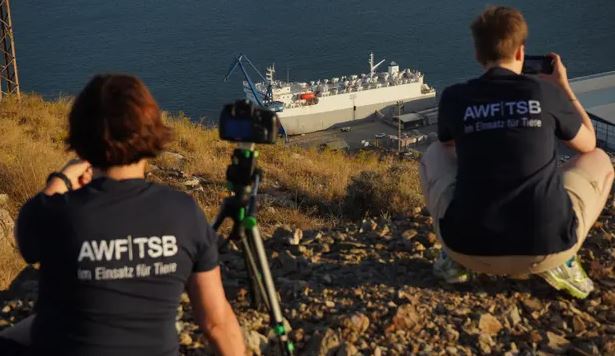 It is 7am in the port of Cartagena, and the Jouri, a livestock carrier, is getting ready for loading. Dozens of trucks full of noisy cattle line up, waiting for their animals to be weighed before they are transferred to the vessel.
The tourists who visit its Roman ruins and nearby beaches might never guess that this region has quietly become one of the biggest players in the global trade of live animals.
The past month has seen a peak in exports, driven by demand for animals to slaughter for Eid al-Adha, the festival of sacrifice, which took place in July this year, and is celebrated throughout the Muslim world.
A boom in exports from Spain over the past decade has seen it now establish itself as the largest exporter of cattle by sea in Europe, and second largest exporter of sheep after Romania.
More than three million farm animals have been sent out on ships from Cartagena’s port in the past five years, mostly to the Middle East and north Africa, in a trade worth almost £500m to Spain in 2020.
A tightening of animal welfare rules by another leading exporter of farm animals, Australia, has been a big boost for Spain. The new rules include requirements for details on the conditions animals will be slaughtered in once they arrive at destination countries.
Since the new rules were introduced in 2011, Australia has stopped trading with Saudi Arabia and Libya, with both counties now a top destinations for sheep and cattle from Spain, along with Lebanon and Jordan.
“Usually within a market, if someone pulls out … someone else comes in to fill the void, and Spain was willing to do that,” says Olga Kikou, European Affairs Manager at Compassion in World Farming, an organisation campaigning for stronger EU regulations on farmed animal welfare.
Spain is also the perfect place to fatten animals, say animal welfare campaigners, who point to the comparatively low cost of feed, and large amount of space available for animals. Many of the cattle are male calves unwanted by the dairy industry and sent to Spain from across Europe.
Along with Tarragona, another Spanish port 500km to the north, Cartagena is the only facility in Spain with permits to consign live animals by sea.

Last year, close to 400,000 animals were exported from Cartagena and a total of 534,000 from the whole of Spain. Not that anyone in the city itself would know. Trucks from farms across Spain bring the animals directly to an area of the port closed off to the public. Only when trucks arrive after the port’s closure, and drivers have to wait at a nearby petrol station, does the noise of the animals give a hint to outsiders.
Animal welfare activists use superzoom lenses to look for evidence of violations of EU rules. These include: wounds, bad conditions inside the trucks, and cruelty to animals when they are loaded.
“Most people wouldn’t even understand why we are putting a goat, a sheep, a pig or cattle on a long transport. It just doesn’t make sense. It’s the unnecessary cruelty, which will sooner or later be the end of this industry,” says Gabriel Paun, director of Animals International.
Although vets check the animals before they board, conditions onboard remain largely unknown, with only Australia releasing mortality figures for what are often multiple-day journeys. Activists are calling for the mandatory presence of a vet on vessels to be included in new EU legislation, expected by the end of 2023.
Last year, almost 3,000 cattle exported from Spain on two separate vessels died within two weeks. The Karim Allah and the Elbeik were stranded after being refused entry into Middle East ports because of suspected cases of the animal disease bluetongue.
The Karim Allah had departed from Cartagena with 895 cows onboard and was refused entry into several ports in Turkey, Libya and Tunisia. After a two-month-long journey, it returned to Cartagena.
During the journey, 31 animals died. The others were declared unfit and euthanised in early March. The Elbeik, with 1,789 animals onboard, suffered the same fate. When it returned to port in Spain, 179 animals were already dead. The remaining animals were also declared unfit and euthanised.
The official report for the Elbeik, seen by the Guardian, describes a lack of water and food for the animals, with malfunctioning feeding systems, overcrowding of some parts of the vessel, breaking maximum density rules, and overall neglect of animal welfare by the crew.
The captain also confessed to Spanish authorities that at least 169 cattle were chopped up and thrown overboard into the Mediterranean.
Activists continue to lobby for an outright EU ban on the live animal trade, and its replacement with frozen meat exports.
Some Spanish politicians agree. María Marín, a member of the regional parliament in Murcia, says her Unidas Podemos party will propose regulations to “forbid the trade of livestock to third countries” and replace it with meat trade of “animals slaughtered in Europe following European regulations”.
Widespread political support for such a ban in Spain remains unlikely, says Spain’s animal rights party, the Party Against Mistreatment of Animals. “Spain is an industrial farm that makes a high contribution to the economy of the country and private companies. It was actually one of the few sectors that grew during the pandemic,” it said in a written answer.

A starting point would be greater transparency, argues Guillermo Díaz, a national MP from the liberal party Ciudadanos. “As long as the citizens don’t have information on this trade, there will be no pressure against it,” he says. “If people knew how these animals are raised and transported, they would turn against it.”